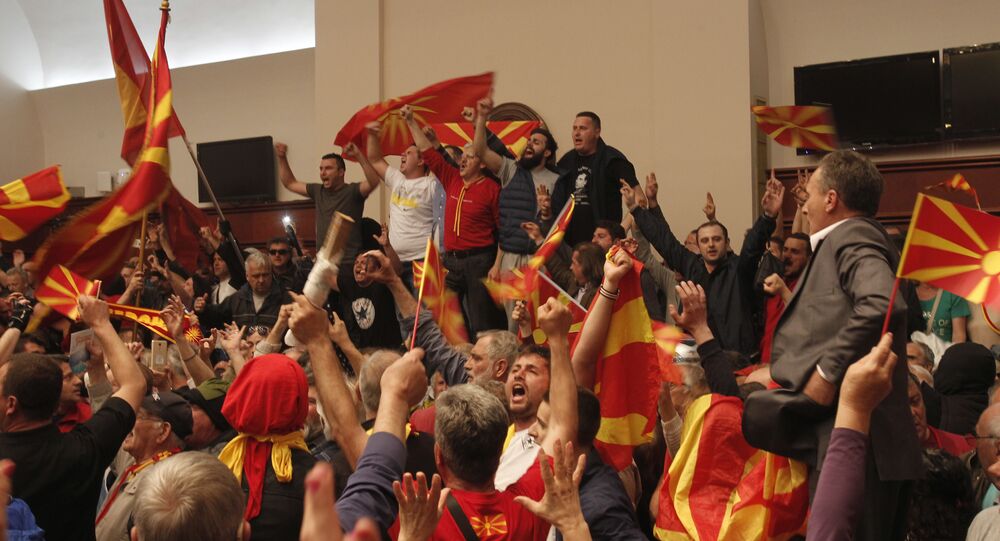 BELGRADE (Sputnik) - Macedonian President Gjorge Ivanov said on Thursday that the Macedonia-Greece agreement on the country’s new constitutional name is a violation of Macedonians' rights for self-determination.

"This government is trying to leave me out… They lie, that under the agreement only the name of the country will change. On the contrary, Macedonian national identity will change, and the 74-year right to self-determination is violated, state legal identity is erased as well as the 27-year history of the state… This treaty legally eliminates the Macedonian people. They want to persuade the Macedonian people to commit suicide," Ivanov said, addressing the nation on the occasion of the Republic's Day as aired by local television.

According to Ivanov, renaming the country will not guarantee Macedonia's accession to the European Union and NATO as reforms and fight against corruption are necessary for that.

The parliament of Macedonia endorsed on Monday the decision to hold a referendum on the country’s new constitutional name on September 30, which will have a consultative character.

© REUTERS / Ognen Teofilovski
Macedonian Parliament Adopts Agreement With Greece on New Name for 2nd Time
On June 17, Macedonian Foreign Minister Nikola Dimitrov and his Greek counterpart Nikos Kotsias signed an agreement on the new name for Macedonia. Athens and Skopje agreed on the Republic of Northern Macedonia after a years-long dispute over the use of "Macedonia," which is also the name of a region in Greece. Ivanov then refused to sign into law the agreement adding that he would not advocate the deal, calling it damaging and a violation of Macedonian law. The Macedonian parliament later adopted for the second time the agreement by a majority of votes.