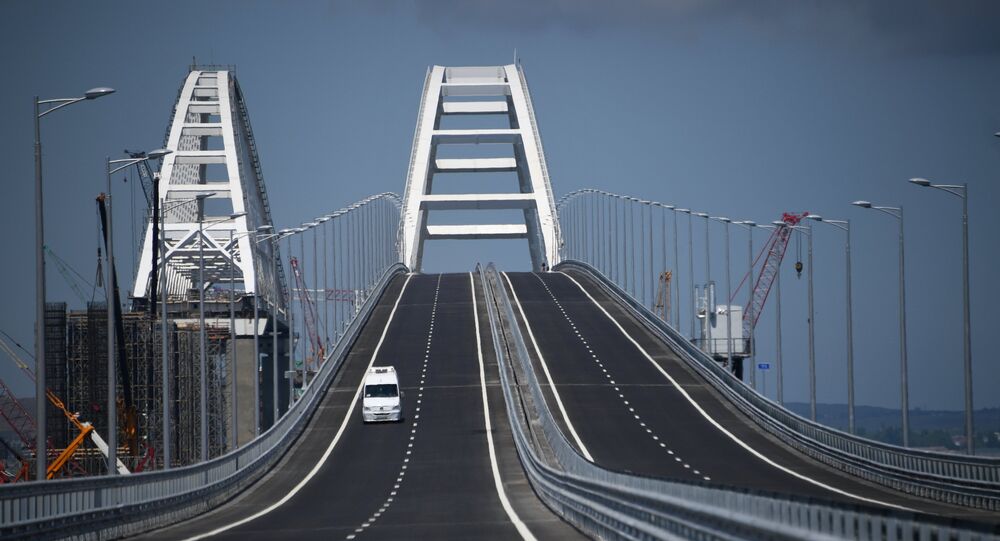 The European Union has expanded the sanctions list associated with the reunification of the Crimea with Russia, as well as the construction of a bridge across the Kerch Strait, the Official Journal of the European Union reported.

According to the document, new sanctions will target AO Institute Giprostroymost — St. Petersburg, PJSC Mostotrest, JSC Zaliv Shipyard, Stroygazmontazh Corporation (SGM Group), Stroygazmontazh Most OOO and CJSC VAD that participated in the construction of the Kerch Bridge and the Tavrida Highway over it.

These measures include the freezing of assets owned by the organizations in the EU, as well as a ban on individuals and legal entities registered in the European Union providing them with any funds.

"This is a subversive policy directed against the residents of the Crimea," Russian Foreign Ministry spokesperson Maria Zakharova said, responding to the new sanctions.

The introduction of EU sanctions against companies related to the construction of a bridge to the Crimea from the Krasnodar Territory will not affect the progress of the projects, the Crimean Bridge Information Center reported.

"Our task is to build a bridge. Automobile segment has already opened, people use it. Now our guys are building a railway section. We all are proud of our work, and if someone does not like it, then this is not our problem," Russian billionaire Arkady Rotenberg, commenting on new EU sanctions against his companies, told Sputnik.

READ MORE: Pompeo: US Will Never Recognize Crimea as Part of Russia

The European Union earlier imposed sanctions on entering EU territory and the freezing of assets of 155 persons under this sanctions regime.

The Crimea, a former Ukrainian territory, rejoined Russia in 2014 when about 97 percent of the peninsula's residents voted in favor of the move in a referendum.

The reunification was not recognized either by Kiev or the majority of Western countries.

Russia has repeatedly said that the vote was held in compliance with international law and following democratic procedure.

© Sputnik / Grigori Sisoyev
WATCH Opening Ceremony of Crimean Bridge in Russia
Russia might impose counter-sanctions against European companies in response to the expansion of EU restrictive measures over the Crimea issue, if this move meets the interests of the country’s economy, Vladimir Dzhabarov, first deputy head of the Russian upper house's International Committee, told Sputnik on Tuesday.

The European Union has recently introduced restrictive measures against six Russian companies over the "illegal annexation" of Crimea and construction of the Kerch Bridge connecting Russia to the Crimean Peninsula.

"Russia will impose retaliatory sanctions against European companies operating in Russia, if it does not harm the Russian economy and benefits it," Dzhabarov said.

On May 15, Russian President Vladimir Putin inaugurated the road section of the Crimean Bridge, which opened to automobile traffic the following day.

The Crimean Bridge, which connects the Russian southwestern peninsula with the Krasnodar Territory, is the longest in Russia at 19 kilometers (11.8 miles). The bridge was initially supposed to open for vehicle traffic in next December, but construction finished ahead of schedule.