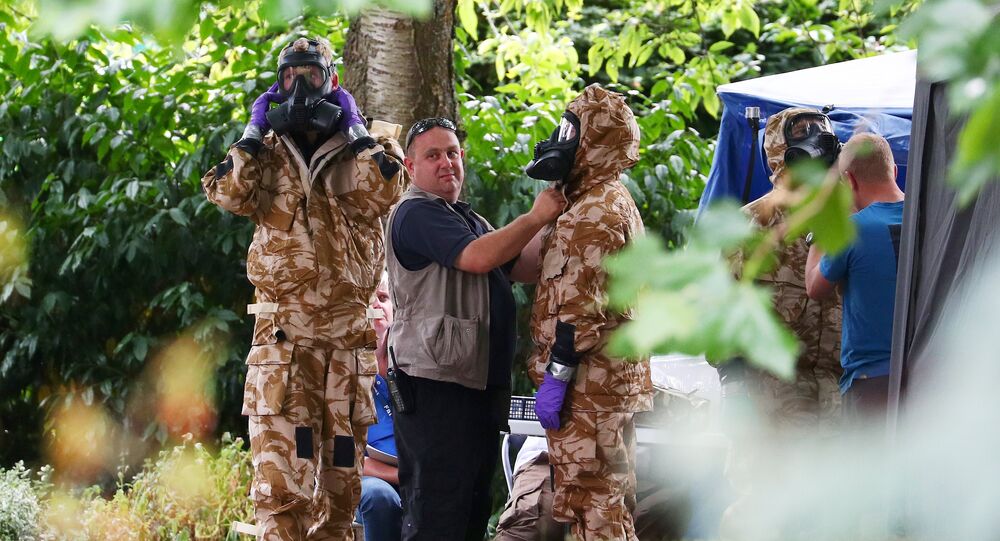 Charlie Rowley, one of the poisoning victims, had said that the late Dawn Sturgess picked up the perfume bottle, which according to UK investigators allegedly contained the A234 nerve agent, and sprayed its contents on her wrists.

On July 20 UK investigators were seen searching public toilets in Queen Elizabeth Park, Salisbury in hazmat suits, Sky News reported. The searches were aimed at determining the place, where the latest alleged A234 poisoning took place, although earlier the investigators announced that they had detected traces of the poison in a perfume bottle, found at the house of one of the latest victims — Charlie Rowley.

Dawn Sturgess and Charlie Rowley live in Amesbury, which is located not far from Salisbury, where the Skripals were poisoned. They were admitted to the hospital with signs of nerve agent poisoning. UK officials declared that the same poison, A234, often called Novichok, was used in the Amesbury poisoning, as it allegedly was in case of the Skripals.

One of the victims, Dawn Sturgess, died on July 8, several days after admission to the hospital, while the other, Rowley, was recently released from care. According to his brother, Sturgess found the bottle and sprayed its contents on her wrists, after which Rowley grabbed it and somehow broke it, which purportedly led to him being exposed to A234 as well.

UK Defense Secretary Gavin Williamson and Security Minister Ben Wallace blamed Moscow for the most recent poisoning, holding it accountable for allegedly using A234 against the Skripals, which led to death of Sturgess, although the investigation into both poisonings are still ongoing and no final reports have been made. The chemical lab at Porton Down has even failed to determine the poison's country of origin. British officials claim they have "solid proof" that A234 was developed in the USSR and that Moscow used it against the Skripals, but never presented it.

Russia denies the accusations and has on multiple occasions suggested conducting a joint investigation into the incidents. However, London has never accepted the offer. Moscow has also stated that the A234 nerve agent was never under development either in the Soviet Union, or in post-Soviet Russia.