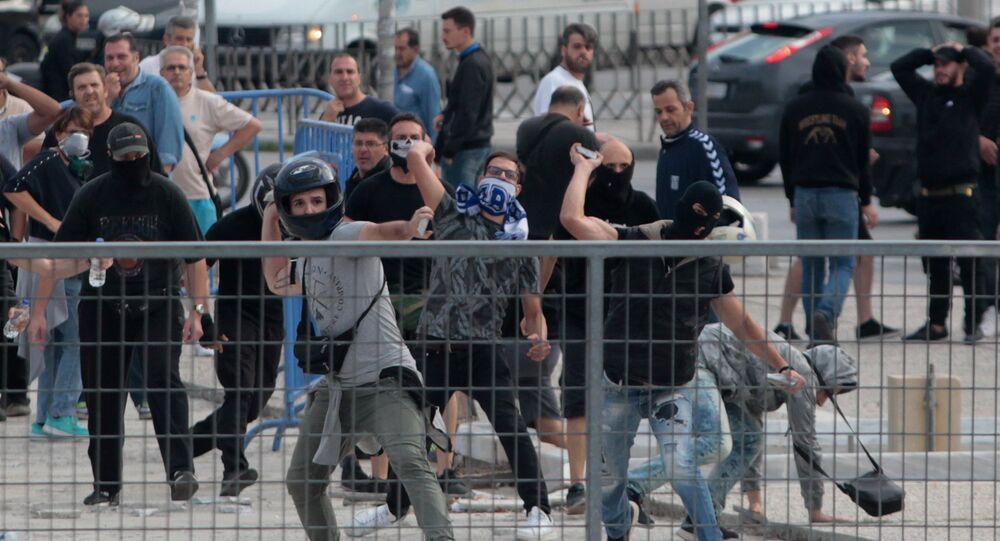 ATHENS (Sputnik) - The fans of the football club PAOK protested on Monday night in the center of the Greek city of Thessaloniki against the recent agreement between Athens and Skopje on changing Macedonia's name.

The protests lasted for several hours, with fans throwing stones and incendiary bottles at the police, who responded by firing tear gas and stun grenades. Four protesters were detained.

"SYRIZA, like any political party or organization, does not need permission from ultra-right and marginal groups to conduct activities related to the agreement with the Former Yugoslav Republic of Macedonia (FYROM) or any other topic. The incidents which occurred in connection with the SYRIZA activities in Thessaloniki reflect the opinions of neither the Thessaloniki citizens, nor any other democratic citizen, nor any sensible fan club. We expect the PAOK football club to condemn these actions, which are committed on behalf of the historical club PAOK association," the ruling party said in a statement.

​On Monday, the ruling SYRIZA party held a meeting in the Thessaloniki international exhibition center devoted to the agreement signed earlier in June on changing the name of the Former Yugoslav Republic of Macedonia (FYROM) to the Republic of North Macedonia. The PAOK fans expressed their outrage over the deal and pledged on their Facebook page to defend "the historic heritage."

People on social media posted photos of protest action in the city of Thessaloniki.

© REUTERS / Ognen Teofilovski
Macedonia Name Deal to Create New Jobs, Facilitate Logistics – Greek Lawmaker
Unrest in Greece has been continuing over the deal on the decades-long name issue, which agreed that Macedonia would be named the Republic of North Macedonia. Earlier in June, several dozen people protesting against the agreement tried to climb up the stairs to the parliament building.

Macedonia's name has long been a dispute issue between Skopje and Athens and an obstacle to the country's aspirations to join the European Union and NATO. The interim name of FYROM has been used since 1995, as Greece was worried that Macedonia might have territorial claims to Greece’s own region of the same name.