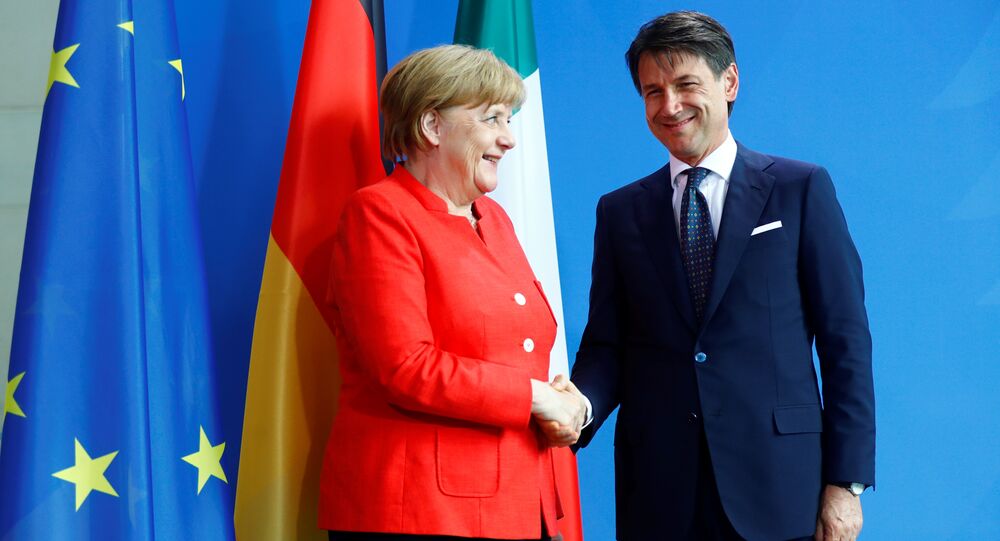 With her coalition government bitterly split over the migration issue, Angela Merkel is ready to work jointly with Italy to stem the tide of refugees flowing into Europe.

"We want to support Italy's desire for solidarity, and also hope that Germany receives understanding when it comes to European solidarity on the question of migration," Merkel said when meeting  Italy’s new Prime Minister Giuseppe Conte in Berlin on Monday.

© AP Photo / Michael Sohn
Gov't Collapse May Lead to Merkel Dismissal, Push Germany to the Right - Scholar
The two agreed to beef up the EU's external border police, Frontex, and cooperate with international organizations to deal with the root causes of migration in Africa and the Middle East.

Merkel and Conte also agreed that people seeking asylum in Europe should have their applications processed in their own or transit countries before they are allowed to enter the EU.

Italy, who is bearing the brunt of the burden of handling the wave of migrants arriving from North Africa and the Middle East, wants other EU countries to assume part of this burden.

Conte, who was visiting Germany for the first time since assuming office on June 1, said Italy wanted changes to EU immigration rules to ensure other member-states share the onus of handling refugees.

Current rules stipulate that refugees need to register their asylum application in the first EU country they arrive in.

Monday’s meeting between Merkel and Conte followed a week of political bickering in Berlin after her interior minister and conservative ally, Horst Seehofer, demanded that Germany start turning back some incoming refugees right at the country’s border.

Horst Seehofer, the head of Bavaria's Christian Social Union (CSU), a partner with Angela Merkel’s Christian Democratic Union (CDU) in the ruling conservative coalition, had earlier given the Chancellor until July 1 to negotiate individual agreements with Germany's neighbors to allow Berlin to refuse refugees who have already been registered in another EU country.

Merkel, who has opposed Seehofer’s plan, has argued that Germany should work with other EU countries to find a common solution to the problem, but eventually agreed with Seehofer on further steps over the migration policy in a bid to prevent a breakup of the country’s decade-long ruling alliance.

France and Italy have already agreed to a similar arrangement.

After the upcoming EU summit, Angela Merkel will inform the CDU leadership about the state of her negotiations with the European countries most affected by the migration crisis.

Since 2015, Europe has been struggling to accommodate hundreds of thousands of migrants fleeing war and social crises in the Middle East and Africa.

With more than 222,000 already filed, two times more than in Italy, Germany tops the list of EU countries asylum seekers want to settle in.
Fifty-three percent of all refugees registered in the EU in 2017 currently live in Germany.