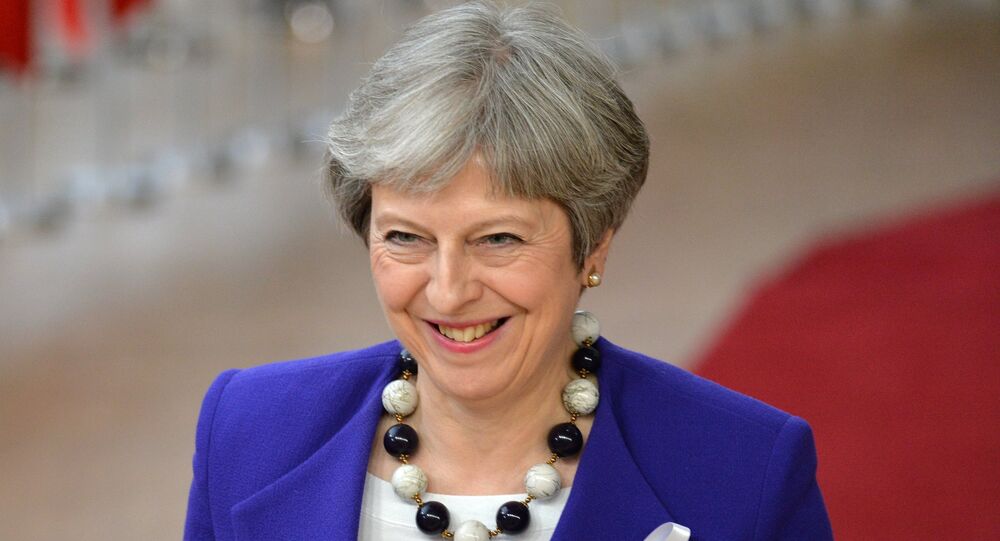 UK PM: There Are Some Areas Where We Should Be Enhancing Anti-Russia Sanctions

Previously, the UK tried to implement sanctions on Moscow in April, following the Skripal case. According to Prime Minister Theresa May, she would press for increasing of the sanctions at a summit of EU leaders later in June.

"There are many issues that the European Union leaders will be discussing at the June European summit, including the important issues of sanctions against Russia. I will be pressing to ensure that we maintain sanctions against Russia, because the Minsk agreements have not been put in place, and indeed I think there are some areas where we should be enhancing that sanctions regime," she told Parliament.

The relations between London and Moscow have undergone a huge shake over the Skripal poisoning of the former Russian intelligence agent Sergei Skripal and his daughter Yulia in Salisbury.

© REUTERS / Toby Melville
UK PM May Still Trusts Johnson as 'Meltdown' Remark Praising Trump Goes Viral
Theresa May and others politicians instantly accused Russia of being behind the attack, imposing a package of diplomatic sanctions against Moscow. This led to the expulsion of over 100 Russian diplomats from the European countries, US, and other allies of Britain. London, however, didn't provide any evidence, that could link Russia with the attack. Moscow has repeatedly denied any involvement in the incident and opted to pursue retaliatory measures against the sanctioning states.

Prime Minister May also addressed the Brexit deal, stressing, that the Parliament can't be allowed to overturn decision of the Brexit referendum. She added, however, that "the government's hand in negotiations cannot be tied by parliament."

"I have agreed this morning with the Brexit secretary that we will bring forward an amendment in the [House of] Lords," May noted.

© REUTERS / Neil Hall
Brexit Campaigners 'Did Not Get Money From Russia' or Do Anything 'Sinister'
Previously Britain's Brexit secretary David Davis stated, that there would be no reversal of the decision to leave the EU, despite the outcome of "divorce talks" with the bloc.

The United Kingdom voted to leave the European Union in a referendum in 2016. The Brexit negotiations officially kicked off in June 2017 and are expected to be completed by the end of March 2019. Britain currently remains part of the EU single market but London leaves have to negotiate new trade deals with the European partners, in case of leaving it.