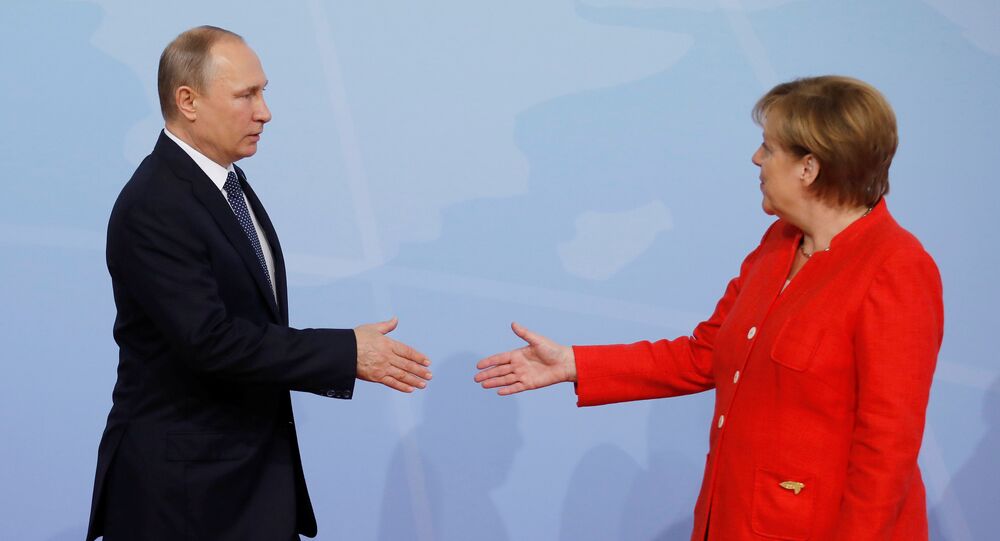 BERLIN (Sputnik) - German Chancellor Angela Merkel said on Sunday that the arguments of US President Donald Trump on Russia's readmission to the Group of Seven (G7) were not convincing.

“I cannot answer in detail, what made [Trump to propose this] … Of course, we asked him, but his answer was not convincing,’ Merkel told German’s ARD TV channel,

She also stressed that the US president had stated that “Russia is playing an important role in matters of war and peace, which is of course indisputable,” however, the G7 comprises states, which “share common values.”

© AP Photo / Jesco Denzel
Summit's Final Communique: G7 or G6 and Trump?
Russia plays an important role in the settlement of crises in Ukraine and Syria, as well as in the process of disarmament across the world, German Chancellor Angela Merkel said Sunday.

She added that she was ready to use different formats for these purposes. Moreover, peaceful solution of Syrian and Ukrainian crises is impossible without Russia, therefore it is needed to maintain dialogue with Moscow, German Chancellor said.

German Chancellor Angela Merkel suggested on Sunday that sanctions could lead to negotiations. “I am the person who says that sometimes one has to wait, maybe to wait for years. But sanctions can become  a means to make ready for negotiations,” Merkel told German journalists.

The G7 meeting in Canada was complicated and disappointing, but the format should be preserved, German Chancellor Angela Merkel said Sunday.

"I would not dismiss the G7 format. Yes, this time it was difficult, it was disappointing, but it does not end this way," Merkel said on the air of the ARD broadcaster.

© REUTERS / Jonathan Ernst
American Policy Cremating the G7 - Expert
On Saturday, the leaders of the Group of Seven countries – Canada, France, Germany, Italy, Japan, the United Kingdom, and the United States – concluded a two-day summit in the Canadian province of Quebec. Canadian Prime Minister Justin Trudeau said that the final communique was agreed by the all seven countries.

However, later the same day, US President Donald Trump said he had instructed US House of Representatives not to endorse the communique due to statements made by Trudeau, who called US metal tariffs imposed on Canada "insulting" and announced retaliatory measures. Trump also accused Trudeau of dishonest behavior, claiming that his statements after summit contradicted his behavior during their meetings.