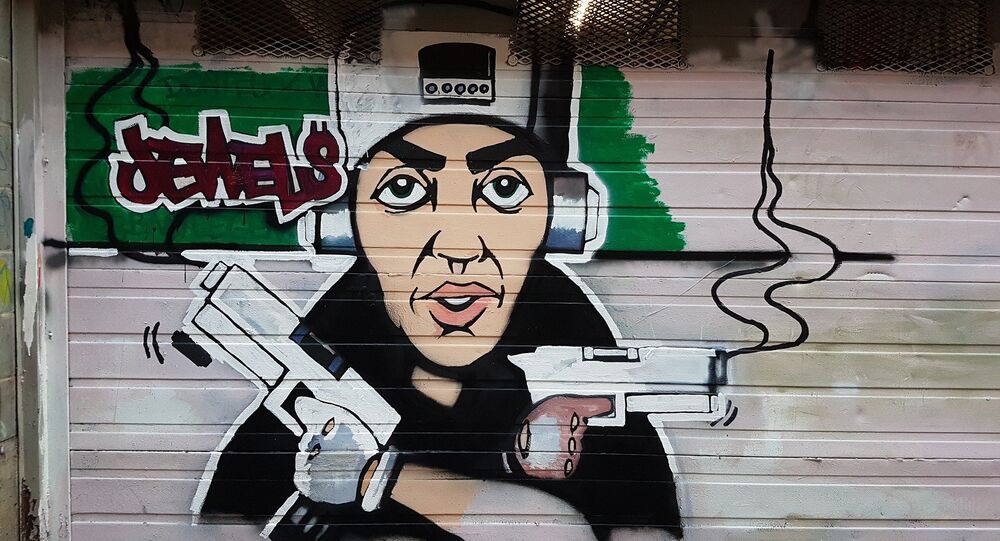 The five members of the gang, who are aged between 17 and 21, will be sentenced at Kingston Crown Court in south-west London on Friday, June 8.

Five members of a London gang who made "drill" music videos glorifying violence are facing a ban from making such films after admitting conspiracy to commit violent disorder. Members of the gang were caught red-handed on their way to attack a rival gang armed with machetes and baseball bats.

A judge will also be invited to impose Criminal Behaviour Orders (CBO) which would ban the gang from making any more drill music videos in the next five years.

Last month it was revealed the Metropolitan Police had asked YouTube to take down between 50 and 60 'drill' music videos, alleging their lyrics were allegedly leading to real-world assaults.

Police spent two years gathering evidence of the gang's music and social media activity and presented a raft of evidence to the court to demonstrate how the gang were promoting violence through their lyrics.

These are some of the weapons police found when they arrested the five back in November. The group said they were only for “props” for the drill music video @LBC pic.twitter.com/vQpMsmn7Z7

One song called "No Hook" included the sound of gunshots and lyrics about shooting a rival gang member.

"Clock me an opp, wind down the window, back out the spinner and burst him," sang one of the gang.

"OT (out of town) trip trying to get some funds. We get bread (money) and invest in guns. Dem boy run when we tapped **. Ching (stab), splash, aim for his lungs," was another lyric.

Gang Could Be Banned From Making Hand Gestures

The CBOs would prevent the gang members from entering the territory of rival gangs, making gang-related hand gestures or wearing bandannas or masks in public.

© Photo : Metropolitan Police
A machete and its sheath, found in the back of a Nissan in which the gang were traveling in west London

On November 9, 2017, the five, who were based in Notting Hill, west London, were arrested in a Nissan Juke car as they headed to nearby Shepherd's Bush.

Four machetes and baseball bats, masks, balaclavas and gloves were found in the car.

The attack was in retaliation for an incident involving the grandmother of one of the gang members.

Retaliation After Grandmother Abused on Snapchat

A YouTube video had been posted showing a Snapchat clip of the grandmother being harassed, abused and threatened by members of the rival gang.

The rival gang had taunted Bedeau — who was known as "Horrid1" and the video was designed to goad the Notting Hill gang into action.

The defendants claimed in court they were on their way to make a music video when stopped by police and the weapons were simply props.

"The lyrics referenced several real and often violent events. Their aim was purely to glorify gangs and violence. There is no doubt the five defendants that day were in the process of setting out to cause some very serious harm to their rivals. They equipped themselves with huge knives and I am sure there would have been some life-changing injuries inflicted or worse had the police not intervened," added Det. Supt. Lowe.

Over the last five years, YouTube has been the place to go to for gangs who want to brag, boast or intimidate rivals.

In 2016, the jury at the trial of several young men convicted of murdering 18-year-old Marcel Addai were shown eight clips from YouTube videos in which the Fellows Court gang and their rivals the Hoxton Boys in east London made open or veiled threats.

Imagine the governments severe cuts to funding for youth services since 2011 for them to have the audacity to say the reason for increased knife crime in the UK is drill music on YouTube, lol.

However, in February 2018 it emerged YouTube didn't still remove those gang videos and Sputnik can confirm that these videos were still on YouTube on June 8, 2018.

Knife crime rose by 22 percent in England and Wales in 2017, according to the Office for National Statistics, and there has been a surge in the number of knife murders in London, the majority of them related to gang disputes.