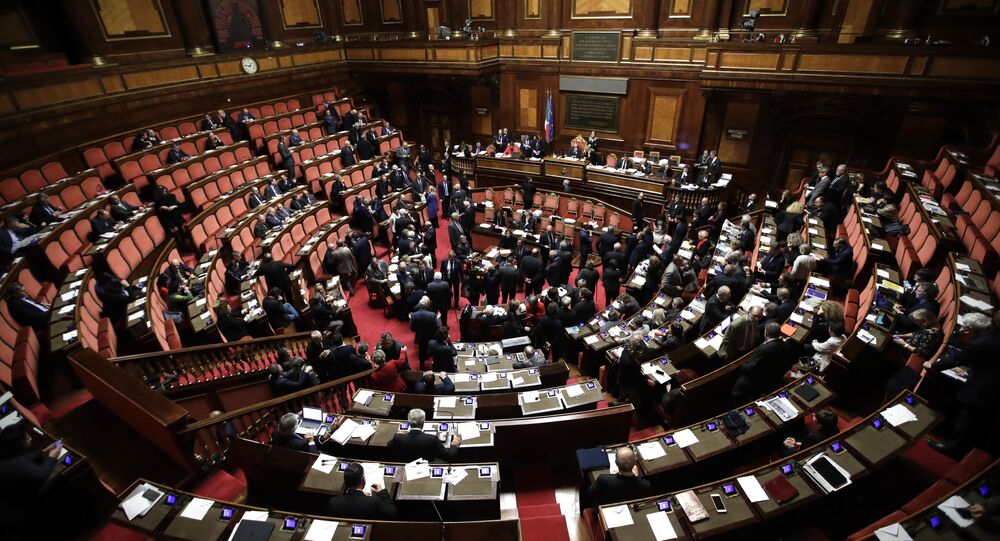 ST PETERSBURG (Sputnik) - Italy’s eurosceptic Lega party expects to get enough ministerial posts in the new government to implement key points of its election program, with regard to anti-Russia sanctions, immigration and EU economic policies, Paolo Grimoldi, a secretary for the party in the northern Italian region of Lombardy, told Sputnik.

"I think we will have enough ministers to ensure we implement points of our program concerning sanctions, immigration, some economic reforms," Grimoldi said on the sidelines of the St. Petersburg International Economic Forum (SPIEF).

He added that that the party expected its leader Matteo Salvini to be appointed an interior minister.

"His main concern is security and his first step would be to enforce it, including through expelling illegal migrants to their countries," Grimoldi noted.

The politician went on to clarify the party’s stance on immigration, EU economic policies, and anti-Russia sanctions.

The Lega party intends to reinforce existing bilateral agreements on the relocation of undocumented migrants, Grimoldi said, pointing to their poor implementation.

According to Grimoldi, the new Italian government has no plans to hold a referendum on leaving the Eurozone but can use some instruments to change EU fiscal rules and renegotiate some EU agreements deemed unbeneficial to Rome.

"It is not so easy to go out of the eurozone. Of course, we haven't changed our stance that the euro currency created many troubles to our economy. This is the fact. We have no plans to hold a referendum on exiting the Eurozone because it is not allowed by our law but we can use some instruments: we can ask to improve inflation, we can ask to devaluate euro, we can ask to pay less to the EU budget, we can ask to reconsider immigration laws … We want to renegotiate some of the EU agreements because we think that existing agreements are not very beneficial to our country," Grimoldi said.

© CC0
Italy May Become Pioneer of Normalizing European Ties With Russia - French National Front
The politician also expressed hope that the European Union would heed Italy’s concerns, given the latter’s considerable contribution to the EU budget.

"Italy each year decides how much to give to Europe. We lose every year because every year we pay more than we get back. We lose 8 billion euros to EU every year … We want to change this situation. We pay more money than we get from Europe. So we call on the EU to stop adding problems to Italy or we can decide to keep our money at home," he said, pointing that it would be "stupid" for Italy to keep paying and getting only criticism in return.

Grimoldi also said that the coalition government saw the need to immediately lift the sanctions, imposed by the European Union on Russia following the 2014 events in Ukraine, as part of its anti-austerity plan.

"We want to lift anti-Russian sanctions immediately. We look at it as an anti-austerity measure. Sanctions were useless and damaged our economy, were harmful to our workers, our businesses. Tomorrow, when we have our government we will do our best to lift sanctions against Russia," he said.

The politician also suggested that the new government was likely to meet pressure from the EU bloc amid its plans, but expressed hope that it would have "enough determination" to lift the sanctions even using veto power.

On May 18, the anti-establishment Five Star Movement (M5S) and Lega party published a coalition agreement and later nominated lawyer Giuseppe Conte for the premiership. On Wednesday, President Sergio Mattarella authorized Conte to form a new national government in a step meant to end political uncertainty created by the March 4 inconclusive election.

'Don't Poke Your Nose in Others' Business': Italian Party Lashes Out at France