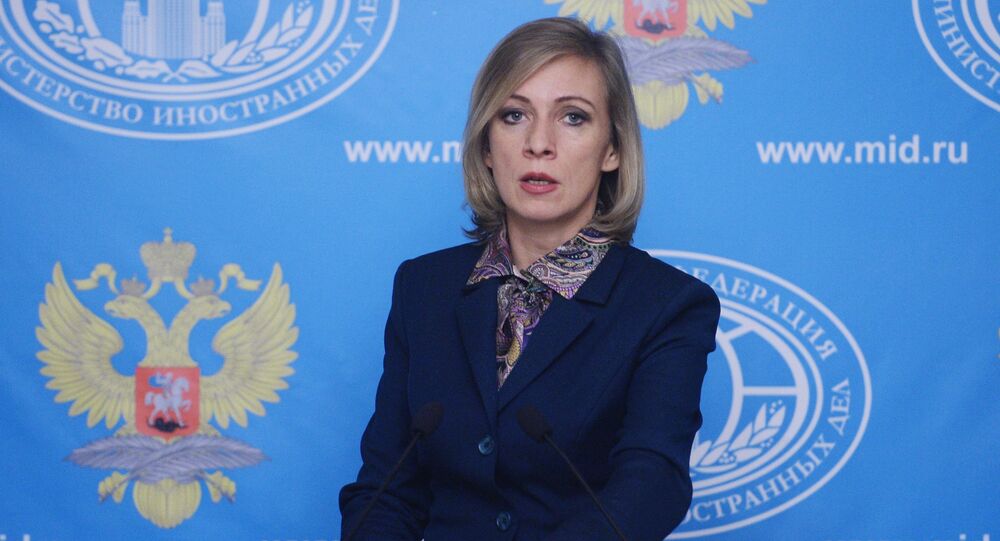 On Tuesday, the Ukrainian Security Service (SBU) broke into the office of RIA Novosti Ukraine in Kiev. Vyshinsky was detained on charges of treason. The SBU accuses Vyshinsky of supporting the self-proclaimed Donetsk People's Republic (DPR) and Lugansk People's Republic (LPR) in Ukraine's southeast. On Thursday, a court in the Ukrainian city of Kherson ruled that Vyshinsky is put under arrest, he was then subsequently transferred to a detention center.

© REUTERS / Stringer
Berlin Urges to Adhere to Media Freedom Amid Arrest of RIA Novosti Ukraine Head
"The situation with the journalists of the Rossiya Segodnya International Information Agency in Ukraine, the raids and arrests, the situation in the United Nations [when Ukraine falsely branded its event on the so-called fake news as organized under the UN auspices] – those are small parts of the whole information landspace. It also includes the story with doping and the Skripals affair. It is all part of the massive information-propaganda work. In fact, the anti-work that the West does in relation to Russia," Zakharova told the Rossiya 1 broadcaster on Sunday.

The spokeswoman noted that it was incorrect to compare the case of Vyshinsky, who is a legitimate journalist, and the case of Ukrainian national Roman Sushchenko detained in Russia on suspicion of collecting secret information on the activities of the Russian Armed Forces.

"The difference is that the Rossiya Segodnya correspondent has in fact been working in Ukraine as a declared correspondent and it is his journalistic work that has become a reason for raids and subsequently, arrest. In regards to Sushchenko … he was not a journalist when he entered Russia. His documents prove that, he did not submit an application for a journalistic visa … That is why it would be wrong to compare Sushchenko with the Rossiya Segodnya correspondents in Ukraine not only in terms of moral standards, but also in legal terms," Zakharova told the broadcaster.

The claims that Russia paid Vyshinsky for "state treason" are groundless as the RIA Novosti Ukraine portal was an information partner of the Rossiya Segodnya agency, which, in turn, was paying for the services provided on a partner basis, according to the spokeswoman.

© Sputnik / Alexander Natruskin
No Violence Used Against RIA Novosti Ukraine HEad Vyshinsky During Detention – Wife
Vyshinsky was not the only journalist targeted by Ukrainian law enforcement officials during the recent SBU raid. The head of the Ukraine-based office of the RIA Novosti news agency, Andrey Borodin, said authorities had searched his place for several hours, adding that he had not been detained. Ukrainian authorities also searched the Kiev apartment of Ludmila Lysenko, a Ukraine-based RIA Novosti correspondent. Lysenko and Borodin have also been summoned for questioning by the SBU.

Rossiya Segodnya Director General Dmitry Kiselev has demanded that the Ukrainian authorities free Vyshinsky immediately and end the persecution of the media. Margarita Simonyan, the editor-in-chief of the Rossiya Segodnya International Information Agency and RT has stated that she thought what was happening in Ukraine was Kiev’s "revenge" for the recently opened Crimean Bridge.