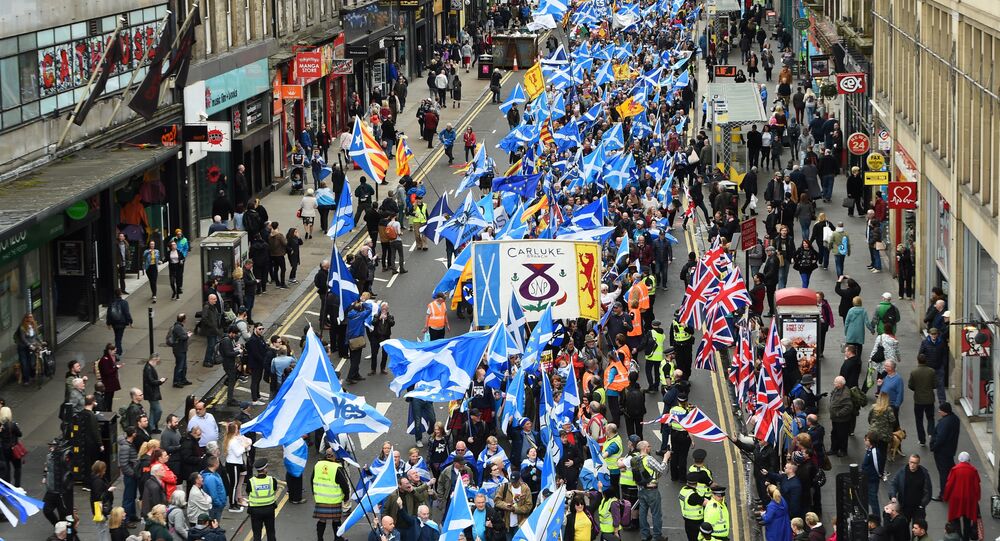 Thousands of demonstrators took part in a march in support of Scottish independence in the country's largest city of Glasgow, the BBC reported on Saturday.

The march has been organized by the All Under One Banner group, whose activists support Scotland's withdrawal from the United Kingdom. According to the organization's representatives, more than 40,000 people were going to take part in the march. Last year, a similar rally in Glasgow attracted more than 20,000 people.

Competing sides in Glasgow as city centre awaits arrival of the "all under one banner" independence match.#AUOB pic.twitter.com/r25SliJLYP

​The demonstration was of a peaceful nature. The participants, including families with children, followed behind a banner saying "Independence Now." In addition to traditional Scottish banners, some activists brought the flags of Catalonia to express their solidarity with the Spanish region in its bid to gain independence from Madrid.

Amazing turnout today, great atmosphere at the “All Under One Banner” march for independence. Met lots of like minded people. One thing is for sure, independence will happen, not when.💪🏻🏴󠁧󠁢󠁳󠁣󠁴󠁿#AUOB #AUOBGlasgow #AllUnderOneBanner pic.twitter.com/AW8lxz3QO5

​In March 2017, Nicola Sturgeon, the first minister of Scotland and the leader of the Scottish National Party (SNP), announced the need for a second referendum on independence ahead of the Brexit vote: between the autumn of 2018 and the spring of 2019.

This was #HOOP super day, keep it going- plan your Saturday with All Under One Banner in Glasgow. #auob 11am Kelvingrove Park to Glasgow Green. If you can't make it for 11am then join in on the way or come and watch! Be part of an exciting day! pic.twitter.com/YDsQWukSxU

​Later, she was able to get the support of the Scottish Parliament on this issue. However, the results of the early general parliamentary elections held in the UK in June of the same year brought serious changes to these plans. As a result of the elections, the SNP lost 21 out of 56 parliamentary seats in the House of Commons of the British Parliament.

All Under One Banner march for independence in Glasgow just outside Kelvingrove Park #AUOB #AUOBGlasgow #independence #Europe #Catalunia #Brexit pic.twitter.com/L4eVAqe9K2

​Later, Sturgeon changed her stance, saying that it wasn't the right time to hold a referendum on independence and urging to wait for the outcome of Brexit talks.

​The first referendum on the independence of Scotland was held in 2014, during which supporters of secession from London lost (45% against 55%).