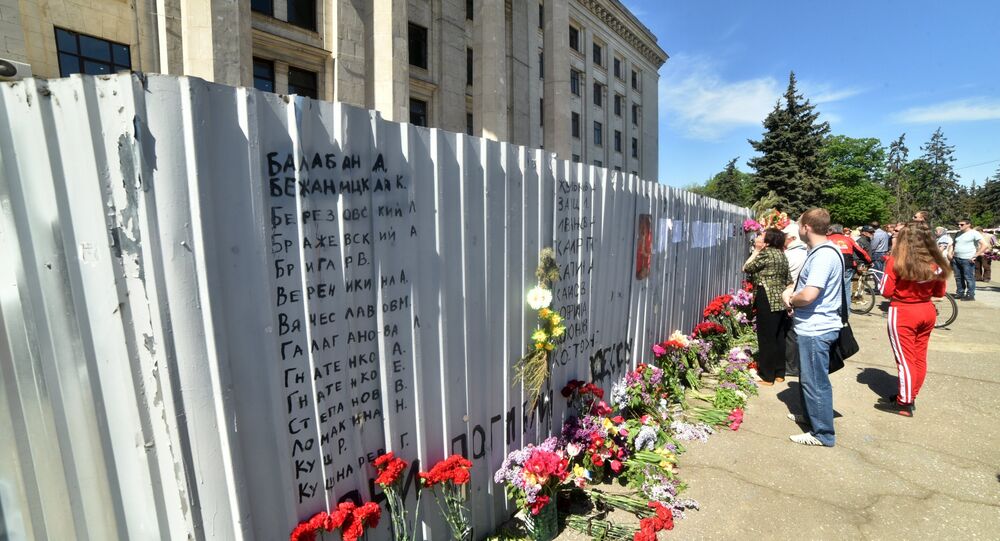 KIEV (Sputnik) - People are laying flowers at the Odessa House of Trade Unions to honor pro-democracy activists brutally murdered in the building four years ago, while the authorities have not registered any clashes or conflicts at the event, the National Police of Odessa said.

The authorities noted that work during the event this year is much simpler, as the St. George Ribbon, a symbol of the Soviet victory in World War II, has been banned in Ukraine, meaning that the ribbon’s manufacturing and wearing will be punished.

"Everyone, who wants to visit the facilities, is being let in. No conflicts, prohibited items or non-standard situations were registered," the police wrote on Facebook.

However, media reports indicated that radicals have beaten up a man who was laying flowers.

At the same time, a nationalist march is set to take place after 18:00 [15:00 GMT) at the Odessa central square, according to the police.

© Sputnik / Stringer
Odessa 2014 Massacre Case to Be Retried for 3rd Time Over Judges Recusal
On May 2, 2014, supporters of the new government in Kiev chased anti-government protesters in Odessa's House of Trade Unions and set the building on fire. Over 40 people burned to death while more than 250 others sustained injuries.

The St. George's ribbon is a widely recognized military symbol in Russia. It is also used by civilians as a patriotic symbol and as a symbol of public support to the Russian government, particularly since 2014. The ribbon first became associated with the Victory Day celebrations in Russia in 2005.