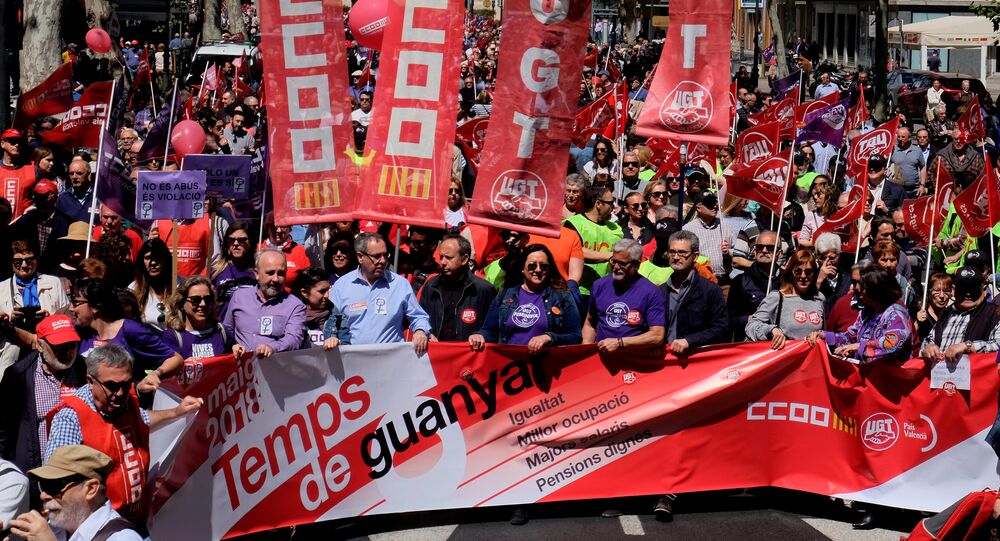 MADRID (Sputnik) - About 500,000 people on Tuesday participated in rallies in 70 Spanish cities to demand equal and fair working conditions on the occasion of the International Workers' Day.

The largest rally took place in the Spanish capital, with 50,000 people in attendance, according to the figures from the organizers – the largest trade unions of Workers' Commissions (CCOO) and General Union of Workers (UGT). However, the authorities estimated the turnout at 12,000.

The event was attended by a large number of the communist activists, who were selling books on the Russian Revolution of 1917 as well the issues of the discontinued magazine called Marxism Today.

© REUTERS / Christian Hartmann
May Day in Paris: Police Detain 200, Use Tear Gasm Water Cannons as Rally Turns Violent (VIDEO)
Moreover, the rallies across Spain were devoted to the elimination of pay gaps between men and women at workplace as well as against any forms of mistreatment.

"No means no. The rest is rape," has been the slogan of feminist activists as women’s rights were also among the major issues on the agenda of May 1 demonstrations, sparked by the controversial verdict of the Spanish court in the La Manada case.

The court convicted the five men, who took pride in their actions on a WhatsApp group named "La Manada," of sexual harassment on April 26. However, many Spanish nationals consider this verdict too soft as the prosecution demanded a gang rape conviction but the court sentenced them to nine years for the lesser offense of sexual abuse.