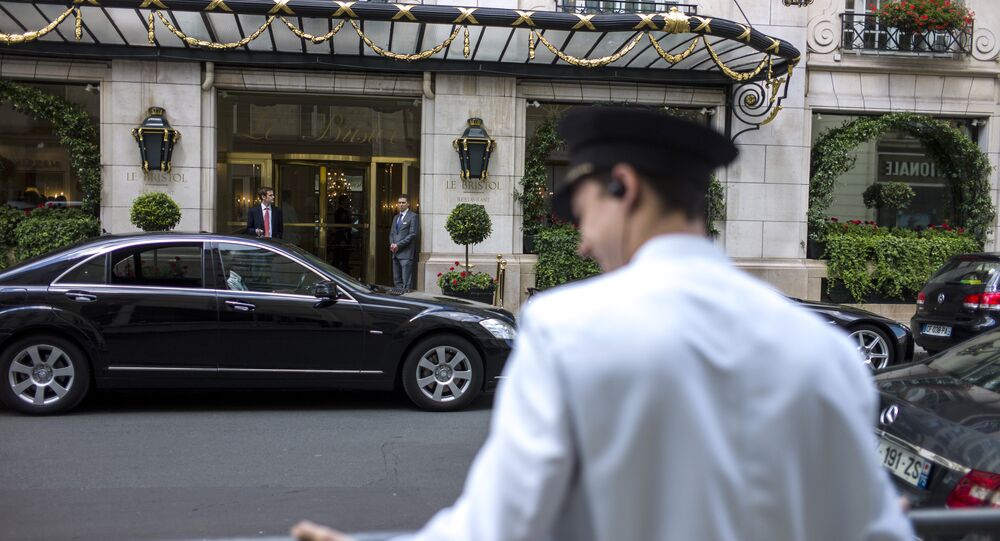 The secret lover of a Russian businessman who died in Britain in 2012 has been giving evidence at his inquest. Elmira Medynska said she received three mysterious phone calls from someone with an English accent after Alexander Perepilicihnyy died.

Miss Medynska, an attractive brunette from the Ukraine, gave evidence to the Old Bailey court by videolink from Paris, where she now runs a fashion company.

She said he vomited violently after eating bad food only hours before flying back to London.

Miss Medynska said she met Mr. Perepilichnyy in March 2012, when she was 23, through a dating website but had no idea the 44-year-old was married or had children.

She said he flew to meet her in Kiev in May 2012 and switched hotels within hours of arriving in the Ukrainian capital.

They met again for a "romantic holiday" in the south of France in the summer of 2012 and stayed at the luxurious Negresco Hotel in Nice.

Had Sex With Perepilichnyy in Paris

Their final tryst — during which they had sex once — was in Paris only days before his death on November 10, 2012.

She said Mr. Perepilichnyy arranged for her to fly from Kiev to Paris on November 8 and met her at the swanky Bristol Hotel where he had booked a suite for the couple.

Miss Medynska told the inquest how he wined and dined her in some of the city's most exclusive restaurants and bought her expensive gifts — a Prada handbag and Louboutin shoes.

But she said that on November 9 — the day before he died — he was "on another planet" and seemed distracted by a string of phonecalls which he took out of her earshot.

Miss Medynska said they went for a meal at the Buddha Bar, an Asian restaurant popular with French film stars and other celebrities.

She said Mr. Perepilichnyy complained about the quality of his food and at one point sent back a plate of tempura prawns.

Miss Medynska said after they returned to the Hotel Bristol Mr. Perepilichnyy spent an hour in the bathroom and she heard him vomiting three times.

Perepilichnyy Was Red-Faced After Vomiting

She said at one point she asked him if he needed to see a doctor and when he eventually came out of the bathroom his face and eyes were red.

The following morning they checked out of the hotel early and he flew back to London, while she returned to Kiev.

A few hours later Mr. Perepilichnyy collapsed outside his £3 million ($3.4 million) mansion in Weybridge, Surrey, and died in hospital.

I’m at the inquest of Russian whistleblower Alexander Perepilichnyy & we’re about to hear from the Ukrainian woman he spent his last day alive with — called to testify only after BuzzFeed tracked her down last year. https://t.co/XD6kSdgdk8

Two post mortem examinations failed to ascertain the cause of death.

On Tuesday, April 10, Professor Monique Simmonds, a senior botanist at Kew Gardens, told the inquest she had found no sign of any plant toxins in Mr. Perepilichnyy's stomach contents.

This was despite earlier press reports which suggested he had been poisoned with gelsemium elegans, a Chinese plant known as "hearthbreak grass".

Planned to Meet up in Switzerland in December 2012

Miss Medynska said Mr. Perepilichnyy when he escorted her to Charles de Gaulle airport and was talking about meeting her the following month in Switzerland.

She said she was completely ignorant of his fate but thought it odd that he did not reply to her text message when she arrived back in Kiev.

Miss Medynska said on November 12 and 13 she received three phonecalls from someone with an English accent who claimed to be from the hospital or ambulance service and claimed Mr. Perepilichnyy had been in a car accident.

She said the caller refused to give her any details about his condition and she decided it must have been a "bad joke".

On November 17 she emailed Mr. Perepilichnyy using a secret email address in the name of Sergei which he used to contact her, and asked how he was but she received no reply.

Miss Medynska said she only found out he had died on December 31, 2012 when she read about it on the internet.

Thought Threatening Email Was From Widow

Several months later she received an email from the "Sergei" email address which told her she "was going to die soon" from AIDS.

She said she concluded it had probably been sent by Mr. Perepilichnyy's widow Tatiana.

"I can't be 100 percent about that but I never replied. I was scared about that," Miss Medynska told the court.

She also railed at a Buzzfeed article which she claimed had led to her being perceived in the fashion industry as being involved in the "Russian mafia".

The inquest has been told that Mr. Perepilichnyy was involved with a company called Hermitage Capital Management, who claimed to be the victims of a $240 million tax fraud in Russia.

Bill Browder, the owner of Hermitage Capital Management, was in the Court 2 of the Old Bailey — where the inquest is being held — on Wednesday, April 11.

The inquest is expected to conclude hearing fresh evidence on Friday, April 13.