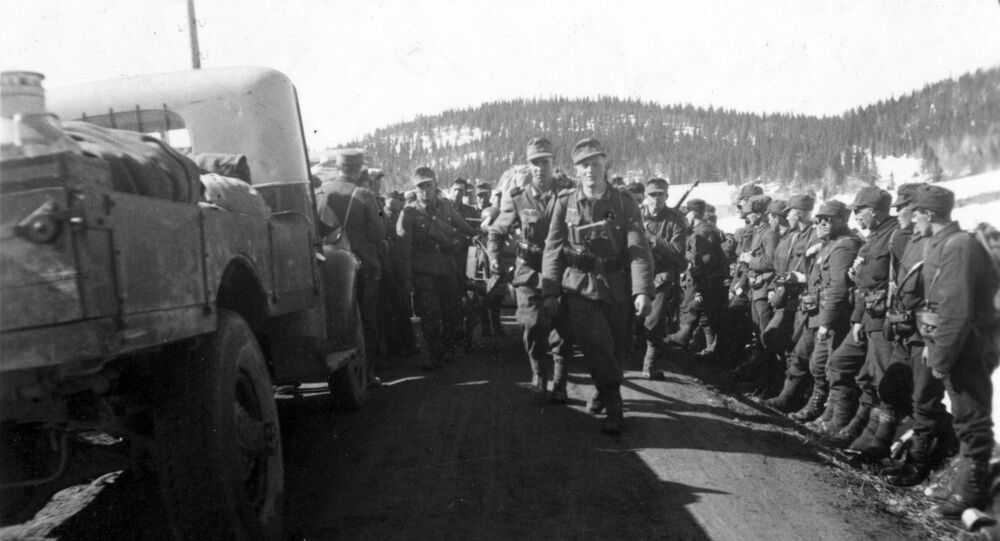 'We're Back': Swastikas Reappear on Anniversary of Nazi Invasion of Norway

The appearance of Nazi-themed propaganda commemorating the bloodiest conflict in Norway's modern history has polarized the nation. While some argued that the attention-hungry culprits should be given as little coverage as possible, others ventured it cannot go unnoticed.

"We are back," said the swastika-marked banners that appeared in parts of Norway on the anniversary of the 1940 Nazi invasion of the Nordic country, the Aftenposten daily reported. Swastika-themed banners and stickers have been encountered in Oslo, Asker, Kristiansand and Fredrikstad, to name a few.

The police had to be called out to remove the Nazi banners deemed as "hate speech" and "clearly unlawful." Line Skott, chief executive officer in the Oslo Police District, stressed that all the banners were equal in size and therefore likely to have been set up by the same person or people.

Agder Police District operations manager Linn Andresen admitted to receiving a number of reports from the public about "Nazi propaganda" material. According to Andresen, banners were hanged out, flyers and leaflets were distributed and even a swastika-sporting flag was flown. To add insult to injury, one of the places marred by Nazi banners, the Archives, was used as Gestapo regional headquarters during the Nazi occupation.

In Kristiansand, three people were arrested for possession of hate speech material. According to the police, all of them have a previous police record and are linked to the Nordfront group. In the old town of Fredrikstad, stickers with the same message were encountered.

​"Most certainly the Nordic Resistance Movement (NRM) is behind it. They measure their success in the amount of media coverage they receive," professor Tore Bjørgo, the head of the Center for Extremism Research (C-REX) at the University of Oslo, warning against giving the attention-hungry extremists too much of it.

According to Bjørgo, the culprits were seeking the greatest possible media coverage. Therefore, he argued, that covering this issue, commenting on it and especially posting pictures constituted an ethical dilemma.

"Once I say that, they have already achieved what they want. It fits into their pattern of provoking media coverage. The more shocking, the better. Now we all get started and give them the PR they want," Bjørgo argued. "They are not stupid, these people. They understand the media logic. One should not give them what they are looking for. If they get a big deal in [major dailies such as ] Aftenposten, VG, Dagbladet and Dagsrevyen, they will celebrate tonight," he added.

According to Bjørgo, the pan-Scandinavian right-wing extremist NRM has about 40 activists in Norway. Bjørgo regards the glorification of Nazism as a conscious political act carried out systematically, partly for shock value and partly for the sake of media coverage.

"It's done by people who know exactly what historical day it is and how it is going to provoke people," Bjørgo said, venturing that the veneration of the Nazis has little appeal in Norway apart from a small circle.

Aftenposten news editor Tone Tveøy Strøm-Gundersen countered that hanging up Nazi symbols in several places across the country can cause turmoil and raise questions. Therefore it's the media's natural duty to inform about their occurrence and their consequences, she argued.

The Nazi occupation of Norway began on April 9, 1940 after German forces invaded the neutral Scandinavian country. After conventional armed resistance to the invasion effectively ended on June 10, 1940, the Nazis controlled Norway until the capitulation of German forces in Europe on May 8/9, 1945.

​Thousands of Norwegians lost their lives or were imprisoned during the conflict. Approximately 50,000 Norwegians were arrested by the Nazis during the occupation. During the occupation, Norway's GDP was reduced by 45 percent. The damage was largest in northern Norway, where the Germans used scorched-earth tactics before submitting to the Red Army.