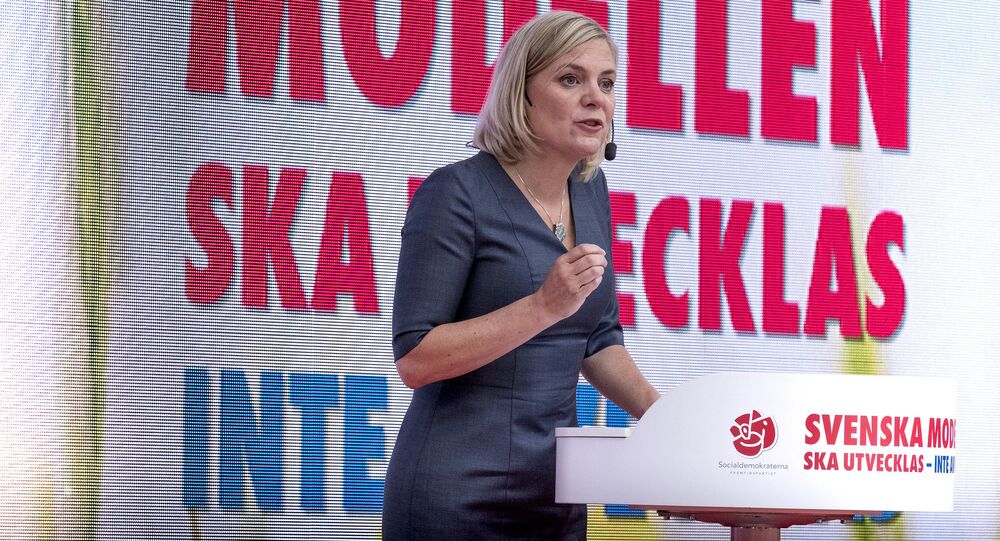 At the height of the 2015 migrant crisis, Sweden's Social Democrat Prime Minister Stefan Löfven argued that there was "no limit" to how many refugees the Nordic country could take in. Now, Finance Minister Magdalena Andersson has called migration one of Sweden's biggest challenges, signaling a change in the party's rhetoric.

"First, we have tightened up our immigration policy. We will not have swinging doors to Sweden. Secondly, we must ensure that people who are entitled to stay in Sweden get to work and that their children get to school," Andersson wrote, suggesting that those who don't have the right to stay must ultimately leave the country.

Secondly, Andersson stressed the necessity of sterner measures against spiraling crime, which she called "worrying," particularly the number of reported sexual offenses. "The government can, shall and will fight crime," Andersson wrote.

In addition, Andersson also emphasized room for improvement in healthcare and welfare. As Swedish society is ageing and there are more senior citizens and young children in the system, welfare must be expanded, she stressed.

"One thing that these three challenges have in common is that none of them can be solved with mere tax cuts. On the contrary, tax cuts will weaken the state. That's not what we need at the moment," Swedish Finance Minister wrote, calling for a stronger state.

The "swinging doors" part of her post is in stark contrast to Prime Minister and party colleague Stefan Löfven of the Social Democratic Party, who in 2015 argued that there was virtually "no limit" to how many refugees Sweden could receive. In an interview with the Sydsvenskan daily, Löfven drew parallels with the early 1990s, when Sweden received many refugees from the former Yugoslavia. "Today, they are a natural part of Swedish society and really do contribute," Löfven said.

"Under Mona Sahlin's leadership [2007-2011], the party had a more liberal migration policy. I'm glad that we're returning to our roots, which rest on equal rights and duties for everyone. This is a prerequisite for everyone to become employable," Public Administration Minister and former leader of Social Democrats youth wing Ardalan Shekarabi explained to the Svenska Dagbladet daily newspaper.

Jonas Hinnfors, professor of political science at Gothenburg University, stressed that the Swedish Social Democrats were following their Danish colleagues in emphasizing tougher integration demands on the new arrivals.

In late 2017, Andersson caused a stir by claiming that Sweden was "full" and advising migrants to try their luck elsewhere.

In Swedish social media, however, doubt was expressed that Sweden's "red-green" coalition government was capable of taking on any of the three challenges listed by Andersson. Many users voiced suspicions of populism on Social Democrats' part, suggesting that winning the election was arguably the biggest of the challenges.

​("And everybody sings: election year!")