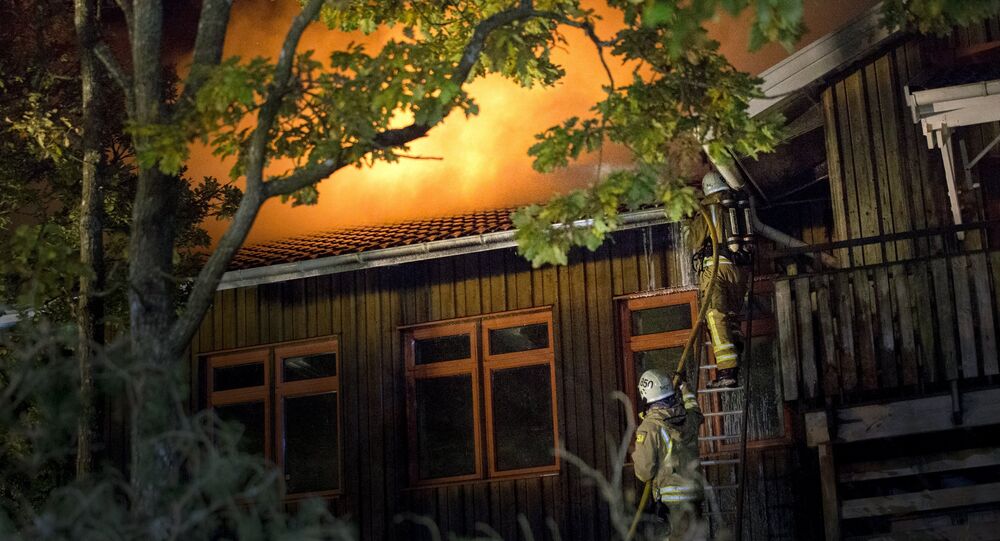 A preschool that is being converted to a refugee asylum has been burned down in Sweden. While arsons in refugee accommodations are not uncommon in the Nordic country, it is the third time the very same building has suffered fire in the recent times, baffling the police.

The automatic alarm at the former Lerkil preschool in Kungsbacka municipality went off in the early hours of Tuesday. When the emergency service arrived at the site, the place was thoroughly destroyed by fire. Luckily, no one was injured.

"Flames were flaring out of the walls. So there was a proper fire," Hans-Olof Allgulin, alarm manager of the Greater Gothenburg rescue service told national broadcaster SVT.

Personnel from three fire stations were summoned and managed to extinguish the fire after a struggle. The firemen also had to remain longer than usual to see to that the fire did not spread to the cellar or the attic of the building.

© REUTERS / Anna Ringstrom
Minister Says Sweden Is Full, Advises Migrants to Seek Elsewhere
So far, the authorities have no idea how the fire started or whether it was premeditated arson.

"We haven't got a clue. I do not know myself," Hans-Olof Allgulin said.

Previously, though, the same preschool building was hit by two fires in a row, both of which were suspected to be arson. Both events occurred after leaflets informing local residents that the building was to be turned into migrant accommodation. No one was detained, however, despite a police investigation. The latest incident is being investigated as suspected arson as well.

"There is simply no reason for it to catch fire by itself in view of the weather," local police spokesman Thomas Fuxborg said.

The building suffered serious damage, which could have been worse, if the emergency services had failed to arrive promptly.

"Had not the emergency service been so quick to the place, the building would have burned to the ground," Fuxborg said.

The building, previously used as a preschool, is currently in the process of being converted into a refugee residence. When the police investigation is completed, the municipality is poised to continue the renovation process. In the meantime, security guards will be put in place.

© AFP 2021 / JONATHAN NACKSTRAND
New Epidemic? 6,000 Burnt Cars Invoke Insurance Fraud Suspicions in Sweden
A local man named Fredrik who lives in the neighborhood, argued that the connection between conversion plans and the fire was obvious.

"Too bad that people do this sort of thing. After all, these are valuable resources burning up. Many think that everything that's new is scary. It is not unique to this particular area, but is a debate going on throughout Sweden," Fredrik told the Göteborgs-Posten daily.

"We are required by law to receive new residents. The fact that our premises are burning down means more unnecessary costs for the municipality and for taxpayers," Johan Burman, property manager of the Kungsbacka municipality, said.

Earlier this year, Kungsbacka saw a series of buildings torched, which prompted the media to talk of a "serial arsonist" operating in the area.

Sweden Hits Migrants Where It Hurts Most to Promote Integration