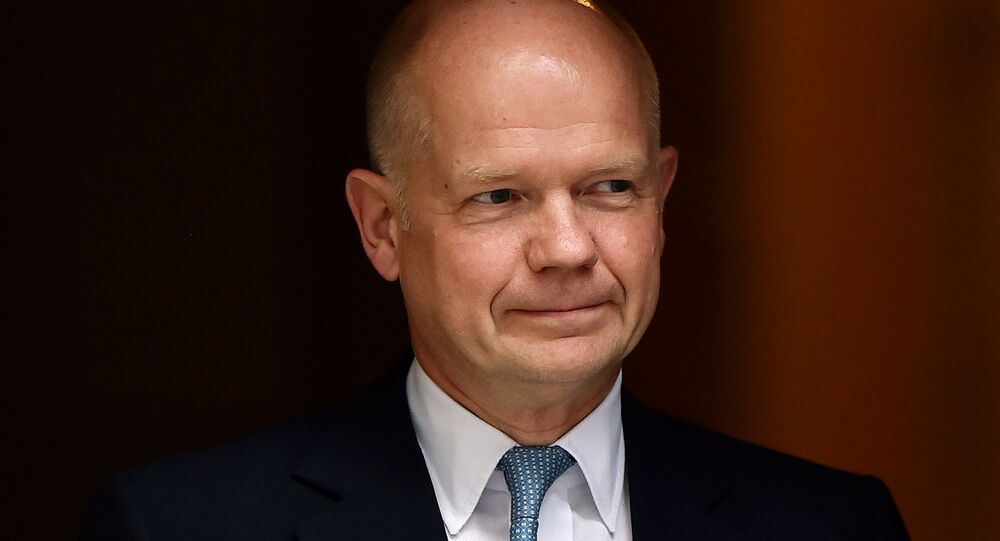 Johnson's trip will constitute the first official visit by a British Foreign Secretary to Moscow ever since Hague met with the Russian Foreign Minister in 2012.

Writing for The Telegraph, former British Foreign Secretary William Hague offered a word of advice to his successor, Boris Johnson, who is due to visit Russia later this week.

Hague, who headed the Foreign Office from 2010 to 2014, commended the incumbent Foreign Secretary for going to Russia in an effort to repair long-damaged relations.

"He is right to go, and will no doubt make a good job of the mixture of firmness and conviviality that works best in Russia: a stern word about spying is not incompatible with an appreciation of the quality of the vodka."

© Sputnik / Sergey Pyatakov
William Hague Rules Out British Weapons Supplies to Kiev
The former Foreign Secretary argued against the "long-term hostility" towards Russia and urged Johnson not to accept that "all efforts have come to nought and that we cannot reconcile how we see the world," even though "that is what we seem to be driven to."

Instead, Hague suggested that Johnson should gradually improve the relationships between the two countries, concentrating on key security and other challenges to build rapport with the Russian leadership, avoiding the zero-sum game mentality.

"We can try, inch by inch, to create some trust and co-operation, on North Korea, Iran, the Middle East, and defeating terrorism, accepting that being too ambitious will end in further disappointment, and steeling ourselves for more trouble ahead."

Hague's comments may raise some eyebrows in Moscow, given that the most recent nosedive in UK-Russia relations occurred during his tenure as the Foreign Secretary.

© AP Photo / Matt Dunham
Russia Wants UK to Play Bigger Role in Ukraine, Middle East - Envoy to UK
Following the 2014 coup in Ukraine and the reunification of Russia and Crimea, Hague had taken exactly the same uncompromising approach against which he cautioned Johnson.

Speaking at the House of Commons, the then-Foreign Secretary claimed that Russia was guilty of "land-grabbing" part of Ukraine's territory.

Although he paid lip service to Moscow's concerns over security of the Russian minorities in Ukraine, Hague swiftly brushed them off, claiming that "no evidence has been presented of those threats."

"I received very strong assurances from the Ukrainian authorities yesterday that they would not make any such threats," he declared.

Hague speech was made just as the Ukrainian government considered banning the Russian language, dissolved the Crimean Parliament and radical nationalist groups were attempting to enter Crimea.

© Sputnik / Sergey Averin
Some 2.5 Million Refugees Arrive in Russia Since Escalation of Donbass Conflict - Lawmaker
Embarrassingly, he also claimed that "it is not true that thousands of refugees are fleeing Ukraine into Russia," even though Russia has received over two millions Ukrainian asylum seekers since 2014.

In 2013, the British and Russian diplomats clashed on Syria, when Hague indicated that the UK may use a "military option" in response to the alleged gas attack in Ghouta, while Moscow called for caution and led efforts to liquidate Syria's chemical weapons.

Earlier in his tenure as the Foreign Secretary, Hague sparked a diplomatic row, when he suggested that Britain has a right to interfere in Russia's internal matters to "investigate" the 2012 presidential elections.

Although Hague's Telegraph article, which calls Russia and Britain "nature allies" and points to a number of key areas where the two countries should cooperate, is a welcomed move, the former Foreign Secretary's words of advice may fall on Johnson's deaf ears, given Hague's own non-constructive role in taking UK-Russia relations forward.

UK Foreign Secretary Refrains From Expressing Support for May