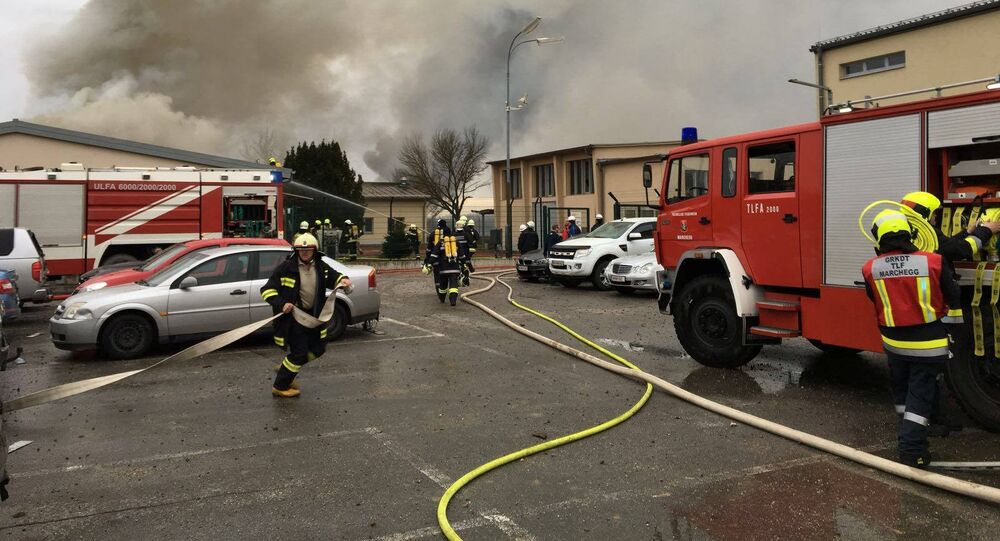 Rescue helicopters are hovering over the scene of an explosion that has hit an OMV gas station in Austria's Baumgarten on Tuesday, according to media reports. The work of the gas hub has been fully halted.

The fire at the natural gas station in the Austrian city of Baumgarten an der March, which was caused by the explosion, has been fully extinguished, OMV spokesperson Elena Menasse told Sputnik.

"Eighteen people are injured and one is dead," Lower Austria police chief Markus Haindl said in the wake of an explosion at a Austrian OMV oil and gas company's natural gas depot in Baumgarten.

When asked whether terrorism was ruled out as a cause of the explosion, the official responded negatively: "technical problems" were the reason behind the incident, "no indication of terrorism."

"We can’t say much … We are at the beginning of the investigation. There are hundreds of fire brigades, rescue teams, police," Haindl said.

Local police have urged citizens to avoid the scene and "follow instructions" from the authorities.

Italy has introduced a state of emergency  due to the suspension of supplies of Russian gas via Austria after an explosion at a gas hub in Baumgarten.

"Gas supplies to Italian consumers will be ensured, since the missing imports will be covered by additional allocation of gas from national underground storage facilities," the Italian Ministry of Economic Development said in a statement, adding that it is in contact with the interested operators in order to determine the time required for the resumption of gas supplies.

According to a representative of Slovakian operator Eustream, Pavol Kubik, gas supplies from Slovakia to Austria have been suspended as a result of the blast.

Russia's Gazprom Export has commented on the incident, saying that it was working to ensure stable supplies of gas to its clients after the explosion at the gas hub in the Austrian town.

Videos and photos have surfaced online, which show the fire caused by the explosion.