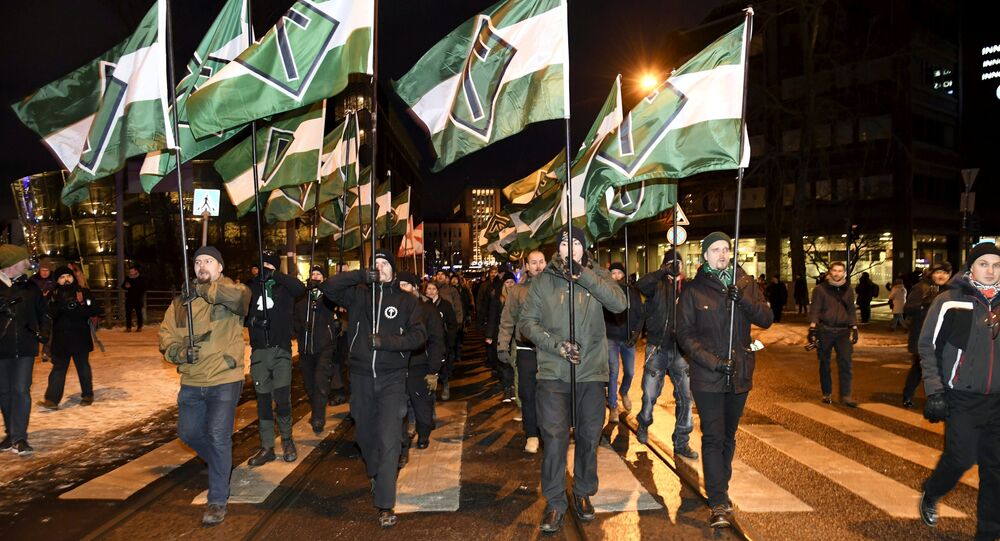 Hardly had a week passed since the Nordic Resistance Movement was officially banned in Finland for being violent and neo-Nazi, but this didn't stop hundreds of its supporters from marching through Helsinki to celebrate Independence Day.

In late November, the Nordic Resistance Movement (NMR) was banned in Finland, becoming the first political movement in forty years to be outlawed in the country.

The NMR, which has long been on the Finnish authorities' radar for its white supremacist and anti-immigrant agenda, was ultimately forbidden after a violent episode, when its member assaulted a pedestrian who'd exchanged angry words with the group's demonstrators during a rally in central Helsinki. The victim died of cerebral hemorrhage one week after the assault. His assailant was later given a prize by fellow NMR mates. The award, however, was not meant to glorify the attack, but rather support the man in a different situation, Norwegian national broadcaster NRK reported.

Earlier this week, however, NRM members resurfaced during Independence Day rallies, which gathered hundreds of radicals in the capital city alone. Although the marches featured both nationalists and their adversaries, militant left-wingers and anarchists, who outnumbered their antagonists, the demonstrations went smoothly, with only ten people arrested.

​The far-right component of the rallies gathered around 450 protesters in central Helsinki. A citizens' estimation listed some 80 Soldiers of Odin and some 320 NMR members.

"They said the Nazis were dead and wished to call themselves National Socialists," Helsinki politician Thomas Wallgren of the Social Democratic Party told the Hufvudstadsbladet daily.

Although the NRM widely marketed this event on its website and invited all like-minded from other countries, Wallgren could not spot other than Finns in the crowd.

"I only heard Finnish, no Russian, Swedish or Polish," Wallgren said.

​Earlier this week, Baltic ferry operator Viking Line refused to accept 24 passengers belonging to the NMR who were en route to Helsinki.

© AFP 2020 / JONATHAN NACKSTRAND
Doubts Cast Over 'Neo-Nazi' Ban Nurtured by Nordics
Previously, Swedish researcher Christer Mattson of the Segerstedt Institute in Gothenburg argued that the ban may ultimately become useless in combatting right-wing extremism for simple reason that the strongly ideologically motivated members will find another means of self-organization.

The idea that former NMR members will re-brand themselves and resurface in the Finnish streets was also voiced by Leo Hertzberg of the Finnish police.

The NMR unites several hundred members across Scandinavia (bar Denmark, whose NMR affiliate disbanded in 2016) and seeks to establish a single National Socialist state on the platform of Nordic self-sufficiency and splitting from the EU. The NMR is a staunch opponent of immigration from "non-white" countries and relies heavily on traditional Nordic and Viking imagery such as runes.