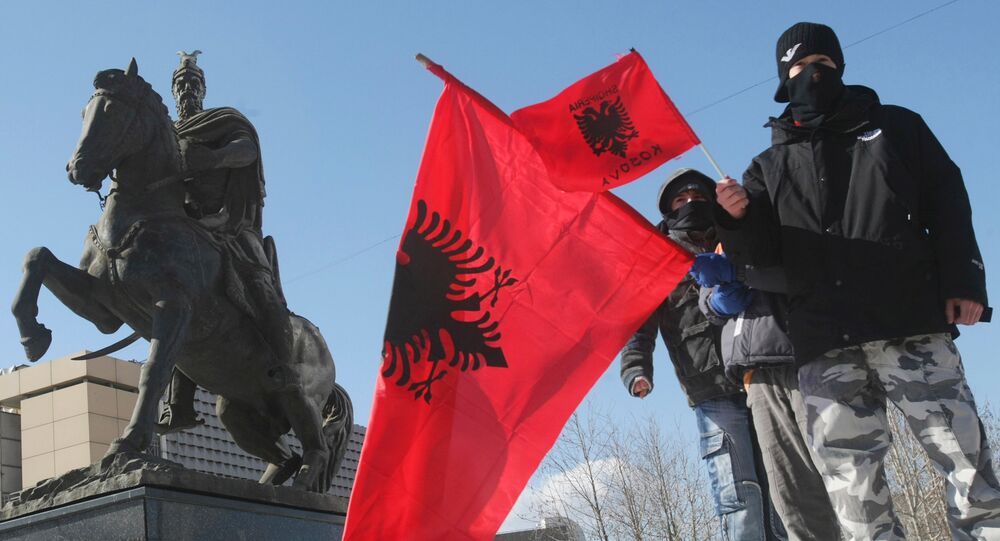 Kosovo’s Plan B: If Not Accepted Into EU, Join Albania?

If Kosovo does not reach its goal of the international recognition of independence by February next year, when it will mark ten years of self-proclaimed autonomy from Serbia, Kosovo will hold a referendum on joining Albania, a source in Pristina told Sputnik Serbia.

On the eve of the 105th anniversary of the independence of Albania, which the country marks on November 28, commemorating the declaration of the autonomy from the Ottoman Empire back in 1912, the main square in the capital of Kosovo, Serbia’s majority-Albanian former province, is decorated with the red-black national flags of its neighboring state.

According to a statement made by Kosovo's President Hashim Thaci, "Kosovo's borders with Albania should be opened, following the example of the European Union."

A source in Pristina, who wished not to reveal his name, has noted to Sputnik Serbia that "such synchronization of efforts is not as naive as it seems at first sight."

He further pointed out that even though ten years has passed since the unilateral declaration of independence by Kosovo, it is still far from being an internationally recognized sovereign state. And the decade-old euphoria among those who supported the independent Kosovo has faded.

"Kosovan leaders must offer something to their citizens, so obviously they have moved on to plan B: "if they do not want to accept us into the EU, we will move on to Albania." In other words, if nothing changes, they will revive their old threat and hold a referendum on joining Albania," the source suggested.

He further suggested that Ramush Haradinaj might have made the holiday of a neighboring country a state holiday of his own "so-called state" not for the sake of preserving cultural values.

"It would have been the same as if Germany celebrated Holland's Independence Day, or vice versa (on the condition, of course, that Kosovo is an independent state). The Flag Day of November 28 is the same very day when the Albanians adopted a document proclaiming the independence of Albania at a meeting in the city of Vlore in 1912. This document, adopted by the People's Assembly, which included representatives of four regions with Albanian populations (Kosovo, Shkodra (Scutar) Janina and Bitola vilayets), created Albania," he explained.

© AFP 2021 / Armend Nimani
Kosovo Albanians, some holding Alkbania's flag, gather in Pristina on February 17,2016 for a major anti-government rally to mark their eighth anniversary of independence from Serbia.

On the other hand, he noted, Thaci's statements that the borders of Kosovo and Albania should be opened following the example of within the EU, is just "hot air."

"There are practically no borders between Kosovo and Albania. What Thaci is trying to do is gain official support for abolishing these borders on paper, by explaining that this is not an association, but a simplification of communication between the citizens of the two countries. Of course, Thaci would not have said this if he was not given a green light to do it. Besides, I am sure that it was also not without the blessing from Albanian Prime Minister Edi Rama, who has serious tensions with the European Union over the EU's treatment of Kosovo and Albania," the source opined.

The authorities in Pristina, he asserted, are trying to revive the "national spirit" in their citizens in order to raise their approval ratings, because this is very important for achieving success on the international arena.

© AFP 2021 / ARMEND NIMANI
Kosovo Albanians wave the Kosovo flag during a celebration marking the 4th anniversary of the Kosovo's declaration of independence in Pristina on February 17, 2012

"It is a well-known fact that for Europe, the Albanian factor is a nightmare, as it simultaneously affects five countries in the Balkans [supposedly Serbia, Montenegro, Albania, Macedonia and the self-proclaimed Kosovo]. Albanians are aware of this, and this awareness makes them stronger. And if we add the support of the US, and, moreover, Turkey, then what else can we expect," the source stated.

During her visit to Pristina, Albanian Defense Minister Olta Xhacka said that Tirana supports the transformation of the Kosovo Security Forces into the Armed Forces. Albania is a NATO member state, and the army of Kosovo would, according to the suggested plan, fall under direct control of the North Atlantic Alliance, suggesting that Kosovo's integration into Albania is already underway.

© AFP 2021 / ARMEND NIMANI
Kosovar Albanians walk under the EU and Kosovo flags in the main square of Pristina on May 4, 2016.

Kosovo, what used to be Serbia’s majority-Albanian province, proclaimed its independence from Serbia in 2008. Serbia disputed the legality of the declaration. The International Court of Justice determined that it did not violate international law. Following the decision of the Court, the republic has received 114 diplomatic recognitions as an independent state, of which two have been withdrawn. Serbia and Russia, among others, do not recognize the autonomy of the self-proclaimed republic.