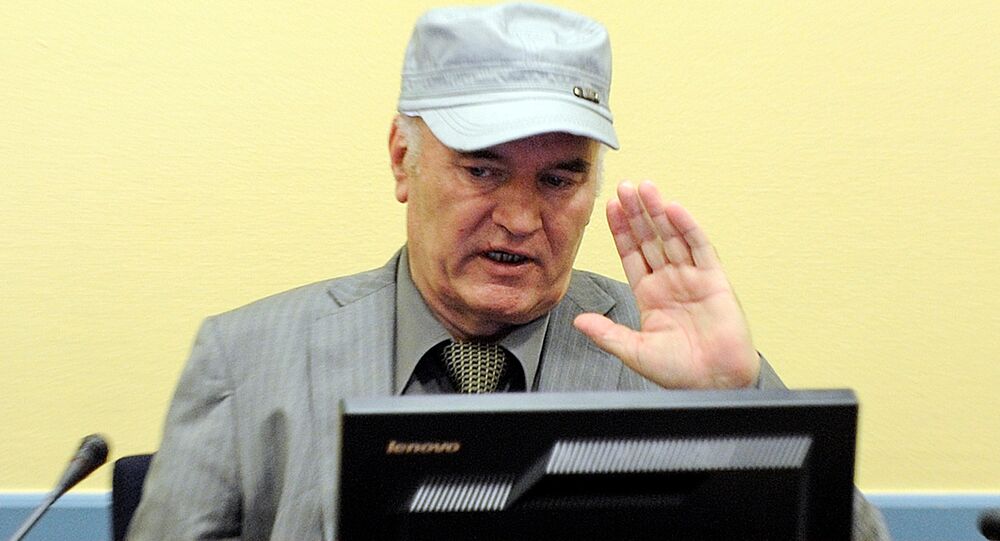 Darko Mladic, the son of a jailed former Bosnian Serb military commander, in an interview to Sputnik spoke about the court process, his father's health condition, as well as his views on the Ukrainian crisis.

BELGRADE (Sputnik) — Ratko Mladic, who is currently awaiting the ruling of the International Criminal Tribunal for the Former Yugoslavia (ICTY) in detention, does not expect the tribunal's judges to be impartial, Darko Mladic said.

"In case of General Mladic, two of the three judges are in an open conflict of interest. In other cases, where they tried other defendants, they mentioned him in the verdict as guilty for the events that General Mladic is accused of perpetrating," the ex-commander's son stressed.

According to Darko Mladic, his father considered the Hague Tribunal "not a court but a NATO commission" and believed that the ICTY violated his right for protection and medical treatment.

© Sputnik / Andrey Stenin
Moscow Ready to Take in Bosnian Serb Commander Mladic for Medical Treatment
According to Darko Mladic, brain scans show that Mladic has suffered two strokes and an infarction while in UN custody, which has raised the issue of his inability to participate in the trial.

In early November, Mladic’s defense asked the ICTY to postpone the verdict and demanded the court publish Mladic’s medical documents before the verdict. The Russian Foreign Ministry has expressed Russia's readiness to provide medical treatment to Mladic on its territory, but the ICTY refused to temporarily release Mladic for treatment in Russia.

The verdict in Mladic’s case is set to be announced by the tribunal on Wednesday. Darko Mladic said that the legal battle will continue after the verdict as either the prosecutors will challenge a not-guilty verdict, or Mladic’s defense team will challenge the opposite ruling.

The position of both the defense team and Mladic’s family implies that the ICTY has failed to prove the former military official’s guilt in any of the criminal counts.

© AFP 2020 / ANDREJ ISAKOVIC
Serbia to Sue NATO Over Damage Caused by 1999 Bombing of Yugoslavia
Ratko Mladic, who is in the UN Detention Unit in The Hague, has been charged with genocide, war crimes and crimes against humanity during the 1992-1995 war in Bosnia. The prosecutors have demanded life imprisonment for him, however, the former commander denies the accusations.

The trial in Mladic’s case began on May 12, 2012, following his arrest by the Serbian authorities in 2011 after the ex-military official had been fleeing justice for years.

Ratko Mladic believes that the current crisis in Ukraine is similar to the crisis in Yugoslavia.

"His [Ratko Mladic's] main idea is that the break-up of Yugoslavia is the great tragedy. Not a disintegration but a break-up. He believes that this has been done from the outside with the help of assistants from within. Today, we see the same improved recipe in other countries, from Libya and Syria to Ukraine. The Ukrainian scenario is a modern version of the Yugoslav scenario, which might have been an experiment of NATO," Darko Mladic said.

A number of bloody ethnic and religious conflicts took place in Yugoslavia between 1991 and 1995, affecting most of the former Yugoslav republics and leading to the the break-up of the country.

Yugoslavia Revisited: US Hardliners Want to Bomb Syria Like It's 1999