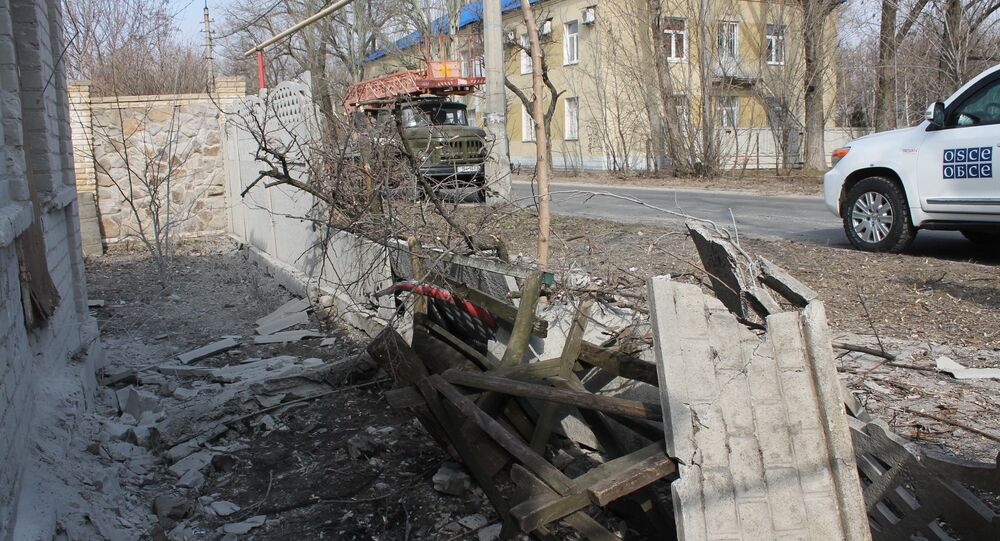 The representative of the self-proclaimed Donetsk People's Republic (DPR) told reporters that a monitoring group of the Joint Center for Control and Coordination of the Donbass ceasefire regime (JCCC) was shelled Sunday by the Ukrainian forces in Oleksandrivka settlement.

DONETSK (Sputnik) — "At 09:00 a.m. [07:00 GMT] the Ukrainian Armed Forces based in Mar'inka opened a precision fire on Oleksandrivka using an SPG-9 [anti-tank grenade launcher]. The shelling lasted for more than an hour. At around 09:10 a.m. an explosion was registered near a school building, where the monitoring group 'Oleksandrivka' is based," the DPR representative at the center told reporters.

© Sputnik / Irina Gerashchenko
Russia's Monitoring Officers in Donbass Come Under Shelling - DPR
The military operation in eastern Ukraine was launched by Kiev in 2014, after residents of the region refused to recognize the new Ukrainian government. In 2015, a ceasefire agreement brokered by the leaders of the Normandy Four group (France, Germany, Russia and Ukraine) was reached in Minsk, but the situation has remained tense, with both parties accusing each other of violating the ceasefire.
...
Reddit
Google+
Blogger
Pinterest
StumbleUpon
Telegram
WhatsApp
426

Conflict in Donbass Cannot Be Resolved Only Through Normandy Format - Kremlin