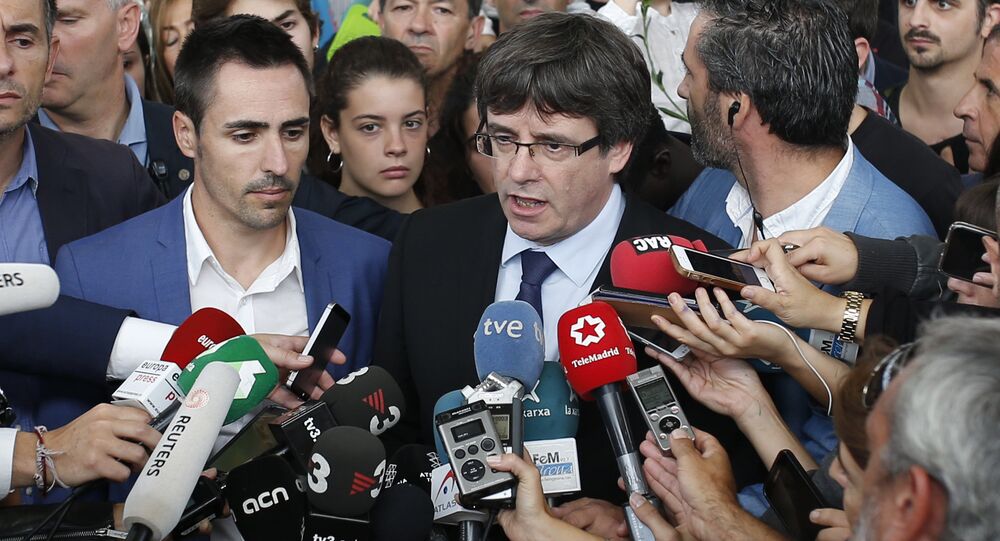 Puigdemont Asks for Mandate to Declare Catalonia an Independent State

Catalan President Carles Puigdemont has said that the results of "self-determination referendum" on October 1 were a "yes" to independence.

In his first address after the historic referendum in Catalonia that saw over 90 percent of voters backing region’s independence from Spain, Puigdemont said that millions of Catalans believe that the region should become a sovereign state.

"I want to follow the people’s will for Catalonia to become an independent state," Puigdemont said.

However, he said it was important to reduce tensions surrounding the vote and proposed to suspend the effect of the independence declaration to continue talks with Madrid.

Speaking for approximately 20 minutes, the Catalan leader condemned the violence that was observed at the referendum as well as the actions of Spanish law enforcement.

© Sputnik / Javier Luengo
The Catalan Diaries: All Eyes on Catalonia
He underlined that Spaniards and Catalans are part of one community and should act together. He noted that the only way to move toward independence is through peace and democracy.

As the Catalan leader was delivering his speech that was postponed by an hour, media reports emerged that Spanish authorities were boosting security across the country.

More than 90 percent of Catalans voted for sovereignty at a referendum which the Spanish government declared illegitimate. Spain's King Felipe Vi described the vote as an attempt to "break the unity of Spain and national sovereignty, which is the right of all the Spanish people to decide democratically." The European Commission referred to the matter as an internal issue between Madrid and Barcelona.