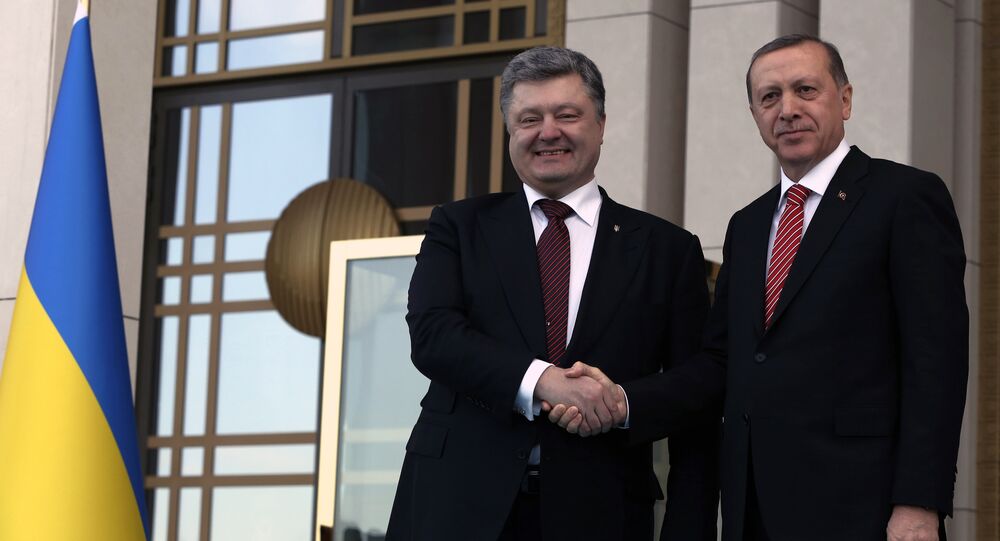 On Monday, Turkish President Recep Tayyip Erdogan visited his Ukrainian counterpart in Kiev for the sixth session of the High-Level Strategic Council. Both sides apparently seek to boost the bilateral relations.

KIEV (Sputnik) — Ukraine and Turkey signed on Monday a number of cooperation agreements, including an action plan for development of bilateral relations for 2017-2019, the press service of Ukrainian President Petro Poroshenko said.

On Monday, Turkish President Recep Tayyip Erdogan paid a visit to Ukraine, held a meeting with Poroshenko and participated in the sixth meeting of the Turkey-Ukraine High Level Strategic Council, co-chaired by the two leaders.

"The Ukrainian and Turkish sides also signed the Action Plan for the Development of Bilateral Relations between Ukraine and Turkey for 2017-2019. Following the Strategic Council, a Memorandum of Cooperation was signed between the Diplomatic Academy of Ukraine under the Ministry of Foreign Affairs of Ukraine and the Diplomatic Academy of the Republic of Turkey. The document testifies to the readiness of the two educational institutions to develop cooperation in the educational sphere, promotes the exchange of scientific experience and the development of educational programs," the press service said.

© Flickr / Philippe Le Moine
‘Double Standards’: Turkish MPs Slam European Parliament’s Vote on Visa-Free Regime for Ukraine, Georgia
According to the press release, the sides also signed amendments to the Agreement on Mutual Assistance and Protection of Investments, which define the procedure for facilitating the attraction of mutual investments and determine the mechanism of their mutual protection in the territories of both states.

Some contracts were signed between the Ukrainian and Turkish defense companies.

Sixteen Ukrainian Citizens Aboard Coach Involved in Accident in Turkey