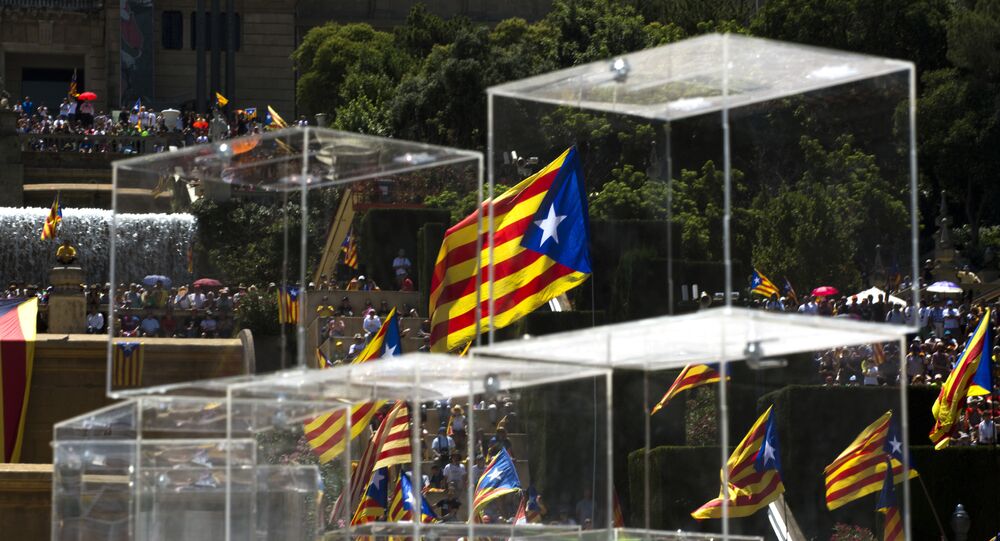 Students have gathered for a rally in one of the largest Barcelona's squares, Placa de Catalunya, or the Square of Catalonia, to voice their protest against the violence of the Spanish law enforcers who attempted to thwart Catalonia's recently held independence referendum, a Sputnik correspondent reported from the site on Monday.

BARCELONA (Sputnik) — On Sunday, Spain's northwestern autonomous region of Catalonia held an independence referendum despite the fact that the vote had been previously ruled illegal by the Spanish Constitutional Court. Multiple violent clashes between the police and pro-independence activists on the voting day resulted in injuries of at least 33 law enforcers and 844 civilians.

Students demonstrate in #Barcelona this afternoon — called at a few hours notice. pic.twitter.com/pYnvnvk3hH

​A column of students approached the square in complete silence, many of them had their mouths taped as a sign of Madrid stripping them of their right to expression. In the forefront of the column, the marchers carried a banner calling to protect the outcome of the referendum, the correspondent reported.

​Having arrived at the square, leaders of the student movement delivered speeches in front of the rally. Then, the organizers put on music, and the students started dancing and singing. According to the Sputnik reporter, the crowd was chanting "Independence!"

Many of the students carry Esteladas, the unofficial flags of Catalonia.

​Early on Monday, Catalan Government spokesman Jordi Turull said that 90 percent of Catalonia's population had voted in favor of secession from Spain. Spanish Prime Minister Mariano Rajoy, meanwhile, said that there had been no referendum, whereas international observers at the referendum claimed that the results of the vote should be recognized.

Three People, Including Minor, Detained During Clashes at Catalonia's Referendum

Over 460 People Injured in Catalonia During Referendum Clashes - Barcelona Mayor