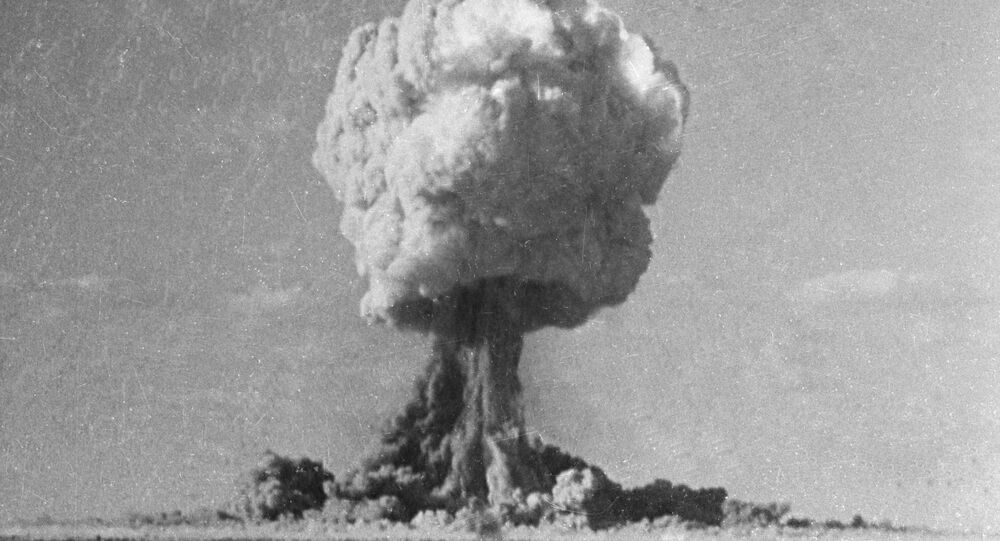 A German treasure hunter accidentally found what could be evidence that the Third Reich was closer to developing an atomic bomb than originally thought.

A 64-year-old treasure hunter from Brandenberg, Germany, named Bernd Thälmann, stumbled upon an uncommon find while scouring ground around the town of Oranienburg.

A shiny piece of metal triggered his metal detector and, upon closer inspection, the nondescript piece of metal turned out to be non-magnetic. The find was different from what Thälmann, who has been scouring the region for some time, expected to find.

© Photo : C&T Auctioneers and Valuers
Declassified CIA Docs Say Hitler Was Alive and Well in Argentina in the 1950s
The treasure hunter brought the piece home and went to the internet for more information. What he found made him call the authorities as, upon deeper study, the metal was revealed to be highly radioactive.

According to media reports, authorities came with hazmat suits and a fire brigade, cordoned off Thälmann's house, and those of 15 neighbors, and took Thälmann into custody. Despite that he sounded the alarm, he was detained for the alleged illegal possession of radioactive materials.

According to a report by the Sunday Express, the find originated from a secret Nazi plant located some 40 miles from Oranienburg. This plant was used by the Nazi-era Degussa company for the development of industrial-scale, high-purity uranium oxides. Degussa was, notoriously, the company that produced Zyklon B gas used to poison people in Nazi death camps.

Despite being top secret, Hitler's nuclear program was known to the Allies, who sought to sabotage or destroy it at all costs. The original facility near Oranienburg was obliterated by airstrikes estimated to have dropped some 10,000-16,000 bombs on it. Reportedly scoured by the Soviet forces after their 1945 victory, the facility was believed to have been completely destroyed.

Thälmann refused to tell police the exact location of his find, according to media reports, intending to return and continue his searches. Judges have yet to determine whether they will set charges against the treasure hunter.

The question of whether the Third Reich successfully developed and tested an atomic bomb before the end of the World War II is a matter of some debate. There are rumors of at least one successful test, while other sources claim that the Nazis tested as many as three bombs.

According to papers released by the US National Archives earlier this year, a German test pilot named Hans Zinsser testified that he saw a ‘mushroom cloud' near a nuclear research facility at Ludwgslust in 1944.

"A cloud shaped like a mushroom with turbulent, billowing sections (at about 7000 meters) stood, without any seeming connections over the spot where the explosion took place. Strong electrical disturbances and the impossibility to continue radio communication as by lighting turned up," according to his logbook.