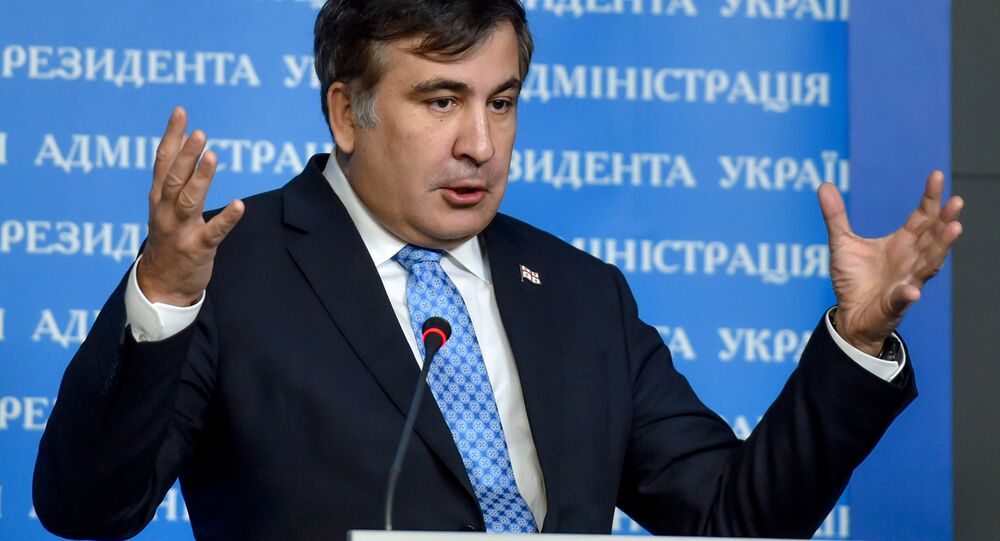 Former Georgian President and ex-Governor of Ukraine's Odessa Region Mikheil Saakashvili has been added to the database of the Ukrainian website, known for revealing personal information of people who are considered to be "enemies of Ukraine".

KIEV (Sputnik) — The Ukrainian website Mirotvorets, known for revealing personal information of people who are considered to be "enemies of Ukraine", has included on Monday Former Georgian President and ex-Governor of Ukraine's Odessa Region Mikheil Saakashvili to its database over illegal border crossing.

On Sunday, a train, carrying Saakashvili, was prevented from leaving a railway station in the Polish town of Przemysl, with the railroad staff asking him to leave the train. He had forced his entry to Ukraine, helped by a crowd of his supporters. Then he headed to the western Ukrainian city of Lviv. Same day, State Border Guard Service of Ukraine spokesman Oleh Slobodyan said that  Saakashvili "illegally crossed the border" as he and his supporters did not pass through security checks.

© AFP 2021 / MANDEL NGAN
Ukrainian Police Start Criminal Procedure Over Ex-Odessa Governor Border Crossing
The website said that Saakashvili had been added to the database over "illegal crossing of Ukraine's state border" and "attack on the border guards during performance of their duties."

Mirotvorets regularly publishes the personal data of those opposed to the ruling authorities in Kiev, including journalists, activists, and those who participated in military activities in the east of Ukraine. In May, the website published  private details of 4,000 journalists working for CNN, Reuters, AFP, BBC, and Al Jazeera, among other outlets, in the breakaway Ukrainian provinces. Some of them received threats, according to the EU delegation in Ukraine.

Saakashvili left Georgia after incumbent president Giorgi Margvelashvili took the office in November 2013. In July, the prosecutor's office in Georgia pressed several criminal charges against the ex-president, particularly accusing him of embezzling $5 million form state coffers for personal purposes. On July 26, Ukrainian President Petro Poroshenko revoked Saakashvili's Ukrainian citizenship, when it was discovered that ex-governor of Odessa had violated Ukrainian law by providing incorrect information on his citizenship application.