German troops stationed at the NATO base in Konya, Turkey, could easily carry out anti-Daesh operations from elsewhere, but Berlin doesn't want to upset Ankara any further, Bundestag deputy Alexander Neu told Sputnik.

A NATO intervention has finally allowed German politicians to see soldiers based in Turkey, after they were recently prevented from visiting the Incirlik base due to political disagreements with Turkey.

The three-hour visit to the Konya NATO base took place on Friday, as part of a delegation headed by the NATO Parliamentary Assembly. It began with a briefing from Turkish military officials, before a meeting with Bundeswehr soldiers where they discussed anti-Daesh operations.

© AP Photo /
Rock and Hard Place: Berlin Chooses 'Kowtowing to Erdogan' Over Spat With NATO
Alexander Neu, a Bundestag deputy from the leftist Die Linke party who was part of the delegation, told Sputnik Deutschland that it is unacceptable that the Germans can't visit their soldiers without the accompaniment of NATO.

"The federal government has its own geostrategic interests. They are willing to swallow a lot for this. I also get the impression that they don't want to provoke Turkey," Neu, who also sits on the Bundestag Defense Committee, said.

In December 2015, in the aftermath of the Paris terror attacks, the German Bundestag voted to support the US-led international coalition in its campaign against Daesh. German deputies demand the right to visit the troops so they can make informed decisions about whether to extend their mandate to take part in the operation.

© REUTERS / RALPH ORLOWSKI
But Still Available from Walmart - German Weapons Maker to Stop Selling Guns in ‘Crisis Regions’
Neu told Sputnik that Germany's contribution to the anti-Daesh campaign could be carried out from Greece's Aktion Airport, but political considerations mean that the German government persists with a presence in Turkey.

"This mission could also be easily implemented from the Greek Aktion Airport. It would be a little more complicated, but definitely not impossible. But the federal government obviously doesn't have the will to take this step."

German Tornado aircraft, aircraft tankers and some 260 service personnel are carrying out non-combat roles personnel in anti-Daesh operations, such as reconnaissance missions and refueling for coalition aircraft.

Most of the German contingent was based at the Incirlik base, but have been moved to the Al-Asrak base in Jordan after the Turkish government twice denied a Bundestag delegation the right to visit soldiers there. 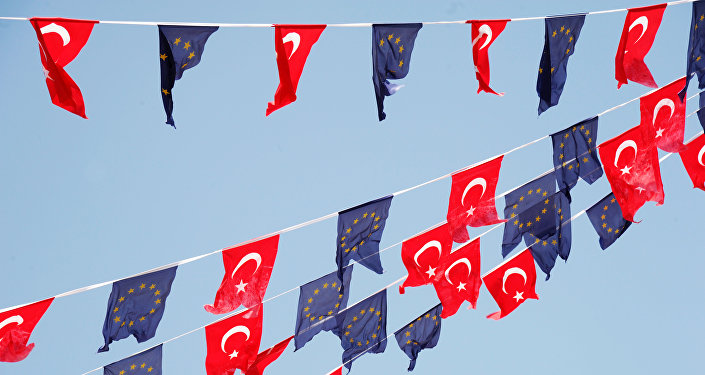 © AFP 2019 / BULENT KILIC
France 'Replaces UK' As Champion of EU Ties With Turkey Amid Berlin-Ankara Spat
A planned visit in May was called off after Ankara was angered by Berlin's decision to offer asylum to a group of Turkish soldiers who sought refuge in Germany following last July's failed military putsch. In 2016, they were prevented from visiting after the Bundestag passed a resolution that recognized the 1915 Armenian Genocide.

Neu complained that the German delegation was not able to visit the airfield or airplanes being used by the Bundeswehr at Konya, where up to 25 German pilots are taking part in anti-Daesh airborne reconnaissance missions using AWACS aircraft.

Die Linke remains opposed to Germany's participation in US-led anti-Daesh operations from Konya, not least because the operation is "legally shaky and politically questionable." The arrangement leaves Germany dependent on the "capriciousness of the Turkish government" with regard to visiting the troops, Neu said.

In July, a Turkish diplomatic source told the German magazine Der Spiegel that Neu's visit to Konya was also in jeopardy because of his comments regarding the Kurdistan Workers' Party (PKK), which is considered a terrorist organization in Turkey and the EU. In an interview last year with Deutschlandrundfunk, Neu described the PKK's status as a terrorist group as "arguable," adding, "one can also speak of state terrorism [in Turkey.]"