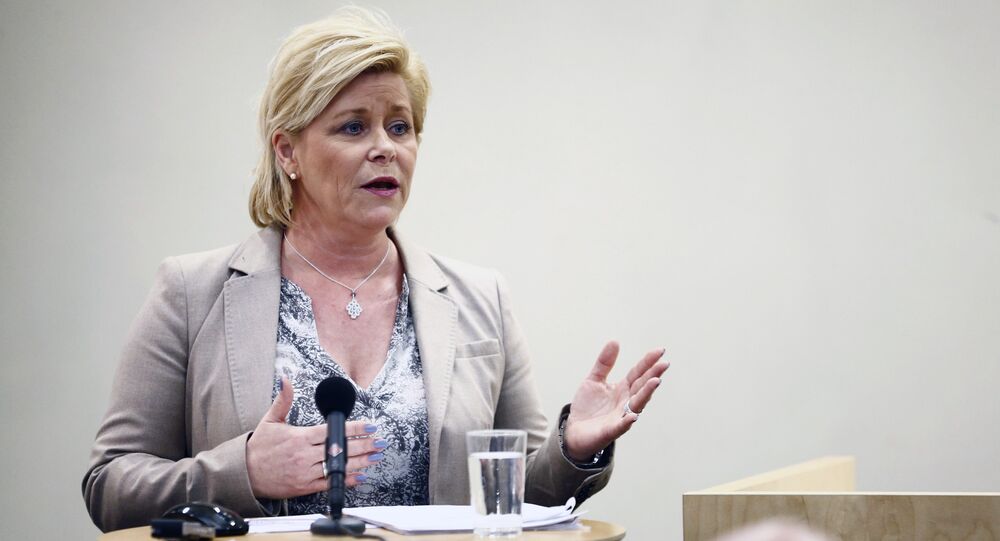 Following a diplomatic tussle with Sweden, which involved a number of high-profile politicians, Norway's conservative parties are likely to strengthen their grip on the reins of government. Norwegian voters seem likely to support both the government's anti-immigration line and the unbecoming picture of Sweden used in their war of words.

The bitter diplomatic clash with Sweden over immigration issues seems to be aiding the Norwegian right-wing parties ahead of the general election. Most remarkably, the Progress Party, which ignited the row with the unflattering comments made by Immigration Minister Sylvi Listhaug, appears to have reached new heights, exploiting the ruckus for its own sake.

The Progress Party, Norway's most anti-immigrant group in parliament, jumped 1.1 points to reach a record 16.6 percent of the vote, which is even more than the 16.3 percent that ushered the Progress Party into government for the first time in 2013, the Norwegian daily Nettavisen reported.

"This is enormously motivating, a great inspiration for us all to continue the good election campaign that the Progress Party has run," Progress leader and Finance Minister Siv Jensen said.

© REUTERS / Prime Minister's Office
Scandinavian Schism: Sweden Snubs Norwegian Migration Minister Over Immigration Remarks
While this marks her party's best result in a "party barometer" in more than a year, and it came amid a bitter diplomatic spat with Sweden that was triggered by Progress Party heavyweight and Immigration Minister Sylvi Listhaug.

Last week, a meeting between Listhaug and her Swedish counterpart Helene Fritzon was notoriously canceled after what Sweden perceived as an abusive rant on Listhaug's part. Listhaug has long used Sweden's immigration policy as a cautionary tale and warning fellow Norwegians against copying it and allowing "Swedish conditions" to develop, alluding to the gang warfare, shootings, car burnings and other integration problems in Sweden's numerous blighted areas, the existence of which the Swedish government vehemently denies.

Despite the fact that Fritzon acrimoniously canceled a meeting with Listhaug after her Norwegian counterpart claimed there were over 60 "no-go zones" in Sweden, Listhaug went on to visit Rinkeby, arguably the most violent of them, on her own in what she described as a "learning trip."

​Predictably, Listhaug's claims raised a ruckus in Sweden, with none other than former Prime Minister and Foreign Minister Carl Bildt interfering to stress that Sweden was a "well-functioning society." Bildt accused Listhaug of campaigning for the domestic audience at home. Many Norwegian politicians claimed Listhaug's rhetoric was aimed at deliberately souring relations with Sweden.

While Listhaug herself denied that her much-debated visit was a campaign stunt, Siv Jensen also downplayed the "Listhaug effect," despite the obvious boost of popularity.

© AP Photo / Chris Carlson
Promoting Inclusion, Hygiene Sweden Buys Burkinis for Schoolgirls
For the time being, Sweden has clear problems in integrating the over 200,000 asylum seekers it received over the past two years alone. Employment rates in areas with the biggest presence of foreign-born residents are much lower than the national average, as opposed to violent crime and assaults against the police. By contrast, Norway has been at pains to stop unfettered immigration with measures its eastern neighbor sees as draconian. In August, for instance, Jensen proposed depriving immigrants of a number of welfare benefits for those who fail to learn Norwegian within five years.

Meanwhile, the Norwegian conservative block seems to be solidifying its stance. Despite the fact that the Conservatives slipped 1.2 points to 23.9 percent of the vote, all their support parties rose, including the Christian Democrats and the Liberals, giving the conservative side a comfortable parliamentary majority over the left.