With Denmark reportedly preparing a bill that could stop the construction of the Nord Stream 2 pipeline, which will deliver Russian gas to a number of European nations, experts give their thoughts on what stands behind Copenhagen's decision.

Local media reported on Saturday that the Danish government is dealing with a bill that proposes requiring the country's Foreign Ministry to be the first to assess requests for permission to build pipelines, which could lead to the rejection of the request to construct the Nord Stream 2 gas pipeline.

According to the newspaper Politiken, the Danish parliament will discuss the bill in October.

© Sputnik / Grigoriy Sisoev
US Sanctions Not to Hamper Nord Stream-2 Gas Pipeline Project Implementation - Gazprom
Speaking to RT, Vladimir Dzhabarov, first deputy chairman of the Russian Upper House's International Affairs Committee, suggested that the Danish government could be promoting the bill due to pressure from the US administration.

"I think that Denmark is not to blame. Here you can see the hand of Washington, which is doing its best to derail the construction of Nord Stream 2," Dzhabarov said, referring to the White House's previous efforts to exert pressure through Poland.

He added that Washington is unlikely to succeed because "there is no alternative to North Stream 2." According to him, the construction of the pipeline meets the interests of "right-minded countries."

"The Norwegian gas is running low in the North Sea, which is also the case with British blue fuel. As for the American liquefied gas, it is much more expensive. So sooner or later, the right-minded countries will act according to their interests rather than those of the United States," Dzabarov said.

Konstantin Simonov, head of the National Energy Security Fund, for his part said in an interview with RT that at the moment there is no legal basis for scrapping the Nord Stream 2 project.

"The only argument against the construction of the Nord Stream 2" is a banal policy: we will not let them build a pipe, because we believe that Russia is a dangerous country. This approach destroys European law as such," Simonov said.

He recalled that "Europeans have always been proud of the fact that "law supersedes political interests."

"And suddenly, for political reasons, Denmark want to change its legislation in order to stop the project, which by the way has already been launched," he said.

"I do not rule out that Denmark will pass such a law. In this regard, similar juggling with justice will not lead to anything good," Simonov warned.
He stressed that if necessary, Russia should uphold its rights in court, in the face of the United States "exerting colossal pressure on Denmark."

"It's no secret that the US demands that Denmark stop this project. In this regard, Denmark and Sweden were initially the weakest links.Nevertheless, I think that Russia needs to clearly show the legal basis of its [possible] lawsuit and its impeccability in terms of European legislation and international law," he said.

He described Denmark's actions as "an attempt to act in contradiction to the fundamental norms of European law."

Simonov was echoed by Alexey Pushkov, a member of the Russian Upper House's Defense and Security Committee, who earlier tweeted that that Denmark is hesitating about the Nord Stream 2 construction because of US pressure amid the new package of anti-Russia sanctions.

"The plot against Nord Stream 2: now Denmark is involved in it. Its government has 'become alarmed' only after the US sanctions. The source of pressure is obvious," Pushkov wrote on Twitter.

Denmark received the request for the expansion of the existing Nord Stream pipeline in April. At the moment, such demands are studied by the Danish Energy Agency at an administrative level, but a new law would allow the Foreign Ministry to reject or accept a project based on whether it is a threat to the country's interests and security.

The pipeline is slated to be laid along the existing Nord Stream pipeline route from the Russian coast through the Baltic Sea and on to a hub in Germany. The pipeline will go through territorial or special economic zones of several countries, including Denmark, Finland, Germany, Russia and Sweden. 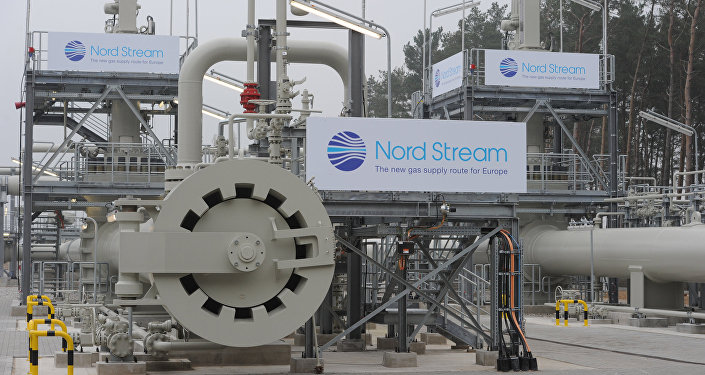 © Sputnik / Grigory Sisoev
By 'Trying to Kill Nord Stream 2', US Risks Having 'Serious Tensions' With EU
The new package of anti-Russia sanctions signed by US President Donald Trump in early August contains, among other things, measures that target Russia's energy projects, including those implemented in Europe like the Nord Stream 2.

According to many experts and several senior European officials, the new restrictions are aimed at squeezing Russian natural gas out of the European market and promoting US LNG supplies instead.

In August, German Foreign Minister Sigmar Gabriel and Austrian Chancellor Christian Kern slammed the new US sanctions, stressing that the construction of the Nord Stream 2 meets the interests of the European Union.