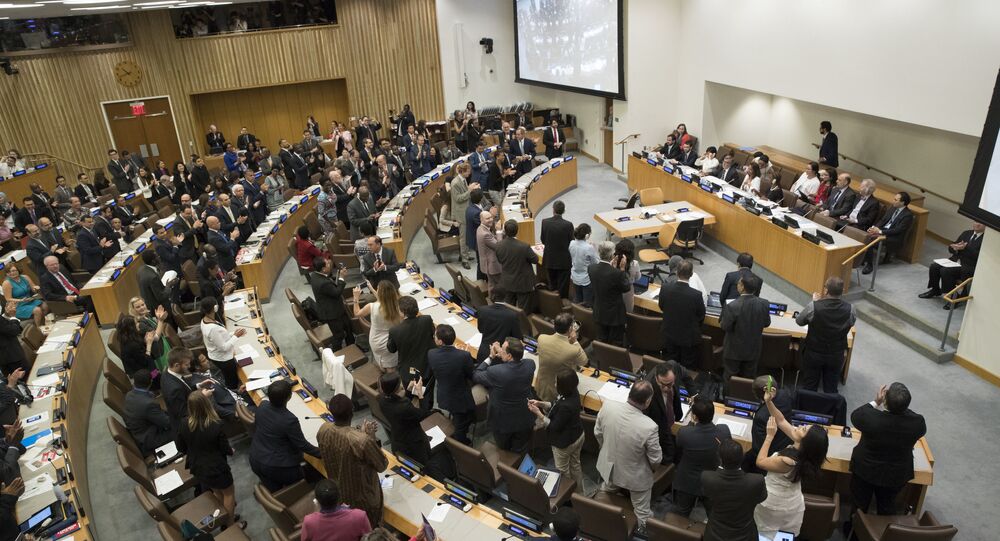 Give Nukes a Chance: Sweden Told to Pick Between NATO and UN Nuclear Weapons Ban

Sweden's defense cooperation with NATO is becoming increasingly strained. Although still independent of the alliance, the Nordic country has come under fire from the US and other NATO nuclear powers for its intention to implement a UN ban on nuclear arms.

The Swedish government is prepared to sign the UN Convention on the Total Prohibition of Nuclear Weapons, to the ire of its NATO partners which possess nuclear capabilities, as well as Germany.

© AP Photo / Antonio Calanni
Norway Finds Nuclear Disarmament 'Incompatible' With NATO Membership
In July, the treaty was initially backed by 122 countries, including Sweden in a vote at the New York UN headquarters, yet according to Sweden's brothers-in-arms, this step could in the long run threaten Stockholm's close cooperation with NATO and even pose problems for the defense industry.

Despite international criticism, however, Swedish Defense Minister Peter Hultqvist made it clear that Sweden's general policy is fixed, but added that the UN resolution is now being investigated more closely.

"There must be a proper investigation of the consequences of this resolution. I would like to make it especially clear that nothing may happen that in any sense undermines our defense and security policy cooperation," Peter Hultqvist told Swedish Radio, venturing that all of the ban's consequences and implications must be studied thoroughly.

According to Hultqvist, the investigation may take a while to conduct. Until it's ready, no treaty may ever be signed, he noted.

Parts of Sweden's political establishment, which would gladly see an end to Sweden's century-long policy of non-alignment, consider the proposed ban a pretext for dusting off the country's perennial scarecrow.

"This plays Putin straight in the hands. This is not just saying no to NATO. This makes NATO membership impossible in foreseeable future," Liberal defense spokesman Allan Widman told Svenska Dagbladet.

"I don't think they are simply rending the air, this is very serious. It's vital that Sweden knows what it is doing. My impression is that not even the Foreign Ministry is fully aware what it is about to do," Hans Wallmark said.

Earlier in August, Sweden's Foreign Minister Margot Wallström said that the government intended to sign the treaty, which she claimed to be "entirely in line" with the Nordic country's disarmament policy as part of a broader security policy.

"This government brought Sweden back into action from the spectator stands [alluding to Sweden's role in the UN Security Council as a temporary member]. Therefore, we have specifically engaged in working on this convention," Margot Wallström told Swedish Radio, stressing that Stockholm's bilateral defense cooperation, including partnerships with the US, France and the UK, would remain unaffected.

In his letter, Mattis claimed that the Swedish-US defense cooperation would be considerably hampered during peace time. Additionally, the possibility of US military support during a crisis would be undermined as well, according to Mattis.

By contrast, Sweden's eastern neighbor, closest defense ally and fellow non-aligned nation Finland refused to support the ban altogether. Previously, the two Nordic countries have been actively cooperating to promote a comprehensive ban on nuclear weapons since the late 1960s and have a generally good record in supporting disarmament goals.

Immediately after World War II, however, Sweden pursued a nuclear weapons program to defend itself against a hypothetical assault from the Soviet Union. The clandestine program ran under various Social Democratic governments from 1945 to 1972 under the guise of civilian research at the Swedish National Defense Research Institute (FOA). In 1968, Sweden signed the Non-Proliferation Treaty and subsequently began dismantling the program.

The comprehensive Prohibition Treaty will be open for signatures on September 20 and will enter into force 90 days after 50 states have ratified it.