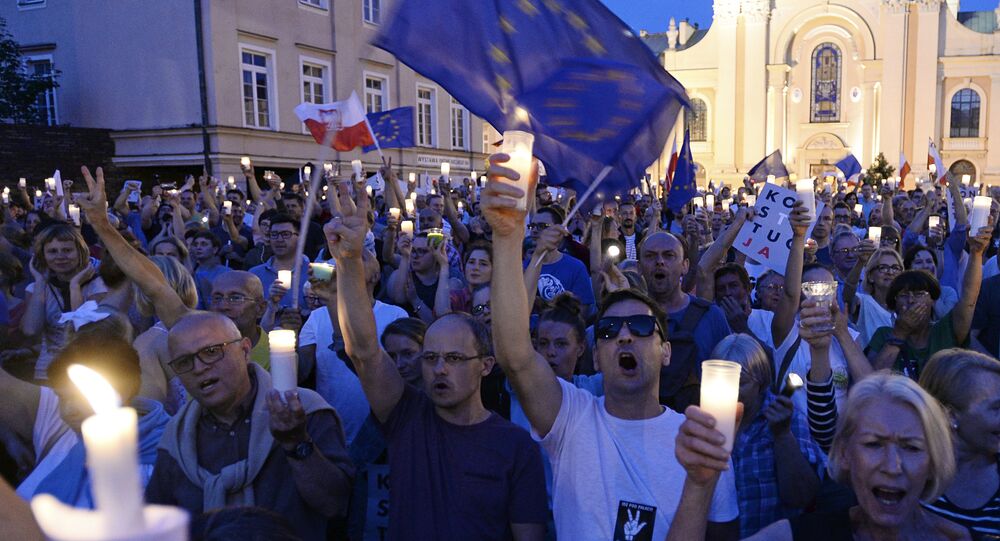 German Chancellor Angela Merkel has met with European Commission chief Jean-Claude Juncker to discuss issues including Poland's EU voting rights. Speaking to Sputnik, Polish opposition politician Joanna Senyszyn warned that there was a good chance the German chancellor may have caved to Brussels pressure to introduce sanctions against Warsaw.

Merkel and Juncker met in Berlin Wednesday for a "classified and private" meeting. Issues on the agenda were thought to include the prospect of stripping Poland's European Council voting rights. A day earlier, Merkel told reporters that Berlin could no longer "hold our tongues and not say anything" for the sake of good relations amid the ongoing rift between Warsaw and Brussels over reforms which the EU claims undermines the independence of Poland's judicial system.

Observers say that Juncker has long been a Poland hawk, calling on the EU to promote tough penalties against Warsaw for its defiance of Brussels. Merkel, on the other hand, has been seen as a moderating influence, attempting to maintain normal relations with Beata Szydlo's conservative Law & Justice (PiS) government.

© Sputnik / Alexei Druzhinin
Polish & NATO Hysteria Over Zapad-2017 Drills 'Really Just Shameless Cash Grab'
But some Polish opposition figures believe that Merkel's Tuesday comments, together with the meeting between Merkel and Juncker Wednesday, may be a 'green light' for punitive measures by Brussels against Warsaw.

Speaking to Sputnik Polska, Joanna Senyszyn, a senior member of Poland's social-democratic Democratic Left Alliance party, confirmed that politicians in Poland are taking Merkel's comments about the rule of law situation in their country very seriously.

"We are members of the European community," Senyszyn noted, "and it is not surprising that all EU members are interested in seeing respect for the law in other states, seeing that both national and EU laws are respected…Unfortunately, Poland disregards European law."

According to the politician, the current government "doesn't appreciate the proposals of the Venice Commission [on the need for an independent judiciary]; it disregards the decisions of the [EU's top court], which has ordered a halt to the deforestation of Bialowieza Forest. I'm not surprised that the representatives of different EU member states are expressing concerns about this."

Earlier this year, influential Polish daily Rzeczpospolita concluded that Poland had been left "alone in the EU" following Brexit and former prime minister Donald Tusk's reelection as president of the European Council in spite of staunch opposition from Warsaw.

Senyszyn suggested that the 'alone in Europe' concept remains relevant today. "Yes, [Rzeczpospolita] is right; today Poland really has been left alone because of the mistakes committed by Prime Minister Szydlo's government. Once, Poles dreamed of being part of the European community. Today, the Law & Justice government questions our membership in the EU, does not adhere to European law, does not accept EU [policy] recommendations. We ourselves are to blame and we are alone, but I believe that either the current government will start acting in a rational manner, or it will be up to the next government to fix things."

© Sputnik /
German Gov't Reiterates Stance on WWII Poland Reparations, Says Issue Resolved
According to Senyszyn, while each country has the right to its own legal system, the European Commission too has the right to be concerned about the situation around Poland's legal system, "because the prosecutor general has replaced the chairs of the courts with his own people. I am not surprised by this position from the European Commission."

"The PiS is constantly shaking its stick, saying that 'this is our internal business and that no one should interfere'. But if you are a member of an organization, it's natural that some decisions are made by this organization. In the end, about 70% of the laws which are binding for implementation by Poland are adopted at the EU level," Senyszyn recalled.

"There are areas where the EU has no competency – for example, in health care," the politician said. "We see what's happening in our health care sector. Today, very good hospitals will be closed, because they are private and aren't part of the network of state medical institutions. The EU does not intervene in this matter, because it doesn't have competency in this issue. But in cases where it has competency, it is obvious that the EU should take a definite position. And it's very good that things happen this way, because in this way they are trying to make the Polish government come to its senses," Senyszyn concluded.