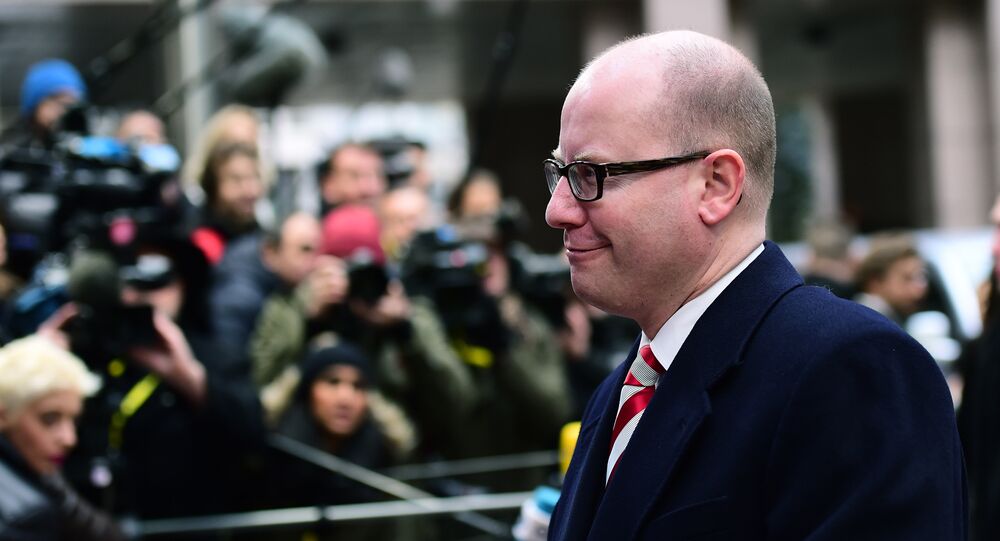 PRAGUE (Sputnik) – Czech Prime Minister Bohuslav Sobotka on Sunday called on other EU member states to participate more actively in the restoration of Iraq from the terrorist invasion.

"I would like to once again congratulate the Iraqi government for the strategic victory here, on the country’s territory, over Daesh [outlawed in Russia]. I believe that Europe should more actively participate in the renovation of Iraq. For example, some of the already tried projects could be used for organizing the return of refugees home," Sobotka said, as quoted by the Czech Lidovky news outlet.

© Photo : Andrijko Z.
EU to Decide Monday on Sending Civil Experts on Security Reforms to Iraq
Sobotka also told journalists that the Czech Republic has been the main arms supplier to Iraq over the past two years with military equipment worth some 1.66 billion korunas ($76 million) exported in 2016. Also, Prague allocated 38 million korunas of financial aid to Baghdad in 2016 and 25 million korunas in 2017.

The Czech Republic is ready to take active part in the restoration of the Iraqi industrial manufacture, Sobotka also pointed out, adding that 60 percent of country’s oil processing facilities have been built with the participation of the Czech specialists and companies.

The Czech prime minister made his statements during his visit to Baghdad which finished on Sunday. As part of the trip, Sobotka has held talks with his Iraqi counterpart Haider Abadi and the country’s President Fuad Masum.

© AFP 2021 / MARWAN IBRAHIM
UK, EU Pledge $95Mln in Humanitarian Crisis Aid for Iraq’s Mosul
The Iraqi infrastructure has been severely damaged by Daesh terrorists who have taken over country’s major city of Mosul in 2014. In early July, Baghdad announced the liberation of Mosul from the terrorists.

Earlier on Sunday, the Iraqi forces have announced the full liberation of the city of Tal Afar, the last major Daesh stronghold near the Iraqi-Syrian border.

Why Saudi Crown Prince Seeking to Warm Up Relations With Iraq

Fourteen Kazakh Nationals Taken Away From Combat Zone in Iraq