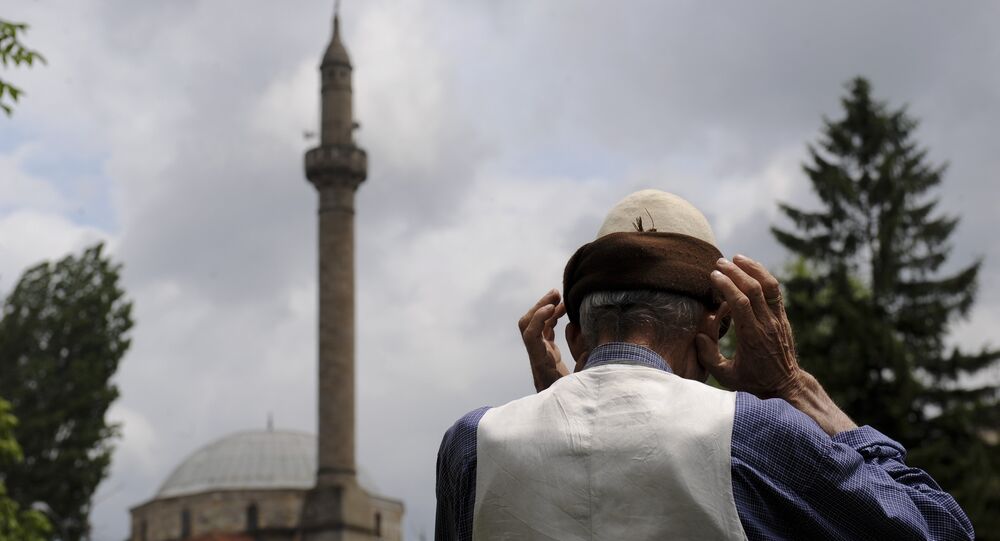 Carving up Kosovo into Serbian and Albanian parts is the only possible way to resolve the long-running conflict in the region, Serbian Foreign Minister Ivica Dacic wrote for Blitz media outlet. Neue Zürcher Zeitung described Mr. Dacic’s proposal as a trying balloon floated by Belgrade.

The idea, initially proposed and rejected in the mid-1980s, re-emerged after Serbian President Aleksandar Vucic announced “an internal dialogue” on the divisive issue of Kosovo.

“I’m glad to hear all these different opinions being put forward about the future of Kosovo. By the way, it was only my idea of a partition that invited such a nervous reaction, and this is something the Serbian president also noted. They do not react this way to proposals either to give up on Kosovo, or to freeze the conflict. Who knows, maybe this nervous reaction shows us the way we should go to find a solution that would suit all and ensure a longstanding compromise,” Ivica Dacic told Sputnik in a written comment.

© AP Photo / Darko Vojinovic
'Compromise Solution': Serbian FM Proposes to Divide Kosovo Into Two Parts
He added that he would discuss the plan in greater detail with President Aleksandar Vucic when the “internal dialogue about Kosovo becomes official.”

In an interview with Sputnik Serbian, Stefan Surlic, a political science researcher at Belgrade University, described the issue of Kosovo as a “Pandora’s box” no one dares to open.

“The West believes that the subject is closed and that Serbia has to resign itself to the fact that Kosovo has an internationally recognized status. The idea of dividing Kosovo in two means  sidelining Pristina and starting a direct dialogue between Belgrade and Tirana on what is Serbian in Kosovo and what is Albanian,” he noted.

He added, however, that it was highly unlikely that anyone in Pristina would agree to give the region’s north to the Serbs and leave the rest to the “Kosovo Republic.”

“They would be more willing to discuss the exchange of the Serbian-populated northern Kosovo for Serbia’s Albanian-populated Presevo Valley,” he said.

Radio Belgrade director and political scientist Milivoje Mihajlovic believes that the proposed partition of Kosovo could have a knock-on effect on other countries ethnic Albanians now live in.

“What we really need is integration, a historic pact between Serbs and Albanians on how to live on. Integration means that borders will be gone and joint projects will be implemented – this is the only way we can have a common future. Those who believe that the division of Kosovo will end the problem of Albanian expansionism in the Balkans are making a big mistake, because the “Greater Albania” idea will spill over to the neighboring countries,” he told Sputnik.

Historian Cedomir Antic does not believe that a formal proposal by Serbia to carve up Kosovo would have a domino effect on other countries just like the unilateral declaration of Kosovo’s independence did not.

“The Bosnian Serb Republic did not use the precedent to break away from Bosnia and Herzegovina, did it? I still believe that there is absolutely no chance for Belgrade and Pristina to agree on dividing up Kosovo,” Antic noted.

© AP Photo / Darko Vojinovic
Serbian President Ready for Direct Talks With Kosovo's Albanians, Authorities
“We didn’t [divide Kosovo] when we had a chance. Slobodan Milosevic believed that anyone who would yield at least one square centimeter of Kosovo’s land would be branded as a traitor. In 2012, the Serbian government of Socialists and Progressives signed the Brussels Agreement with Pristina thus letting Kosovo Serbs become part of the 'Kosovo Republic' without getting any autonomous status,” Antic concluded.

The two governments began to normalize relations in 2013 as part of the Brussels Agreement.

Kosovo has received formal recognition as an independent state from 111 out of 193 UN member —states. Russia doesn't recognize the independence of Kosovo.