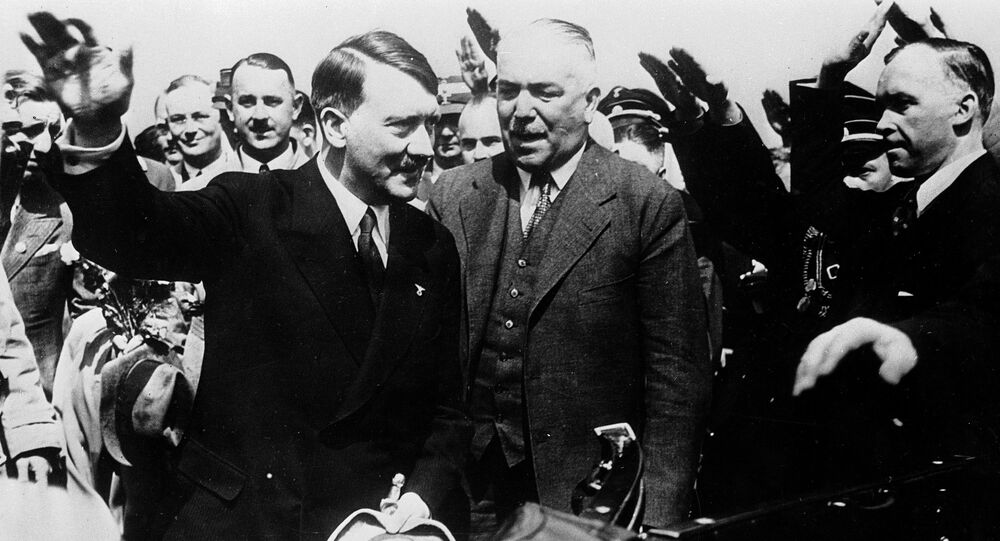 In perhaps the most palpable demonstration of the law of unintended consequences in recorded history, Hindenburg had elevated Hitler in the hope the incendiary upstart could be brought to heel, and forced to adopt milder, more conventional policies and approaches.

The Nazis referred to the 20-month period, in which the National Socialist Party steadily took control over all aspects of German society, as "Gleichschaltung" (literally translated into English as "phasing" or "coordination").

During that time, non-Nazi organizations that wielded any degree of power in Germany were systematically eliminated — trade unions, political parties, social movements, religious groups and more were all suppressed, whether by legal suppression, intimidation or outright murder. Even hobbies and holidays were regimented, with all private clubs brought under Nazi control, and the Nazi-run Kraft durch Freude organization providing state-sanctioned vacation trips.

© Photo : C&T Auctioneers and Valuers
A smiling Hitler surrounded by schoolchildren at the Berghof

Any organizations the Nazis did not eliminate, such as the education system, came under their direct control — and the party also created a variety of new organizations, membership of which was often compulsory, for various segments of the population.

In particular, male German youth were targeted, with boys first obliged to serve as apprentices in the Pimpfe (cub scouts) from age six, then the Deutsches Jungvolk (Young German Boys) from age 10, before entering the Hitler Youth at 14 until 18, when they entered the Arbeitsdienst (Reich Labor Service) and the military.

Less than a month after taking the Chancellor's office, an arson attack on the Reichstag almost entirely gutted the German parliament. Debate still abounds to this day as to who started the blaze and why, but the Nazis claimed a Dutch communist, Marinus van der Lubbe, was responsible — and used the attack as evidence communists were plotting against Germany.

Despite the intimidation of citizens, in the event the National Socialist Party won but 43 percent of the vote, well short of a majority. Nazi chiefs were forced to strike a deal with the German National People's Party in order to assume government.

When the newly elected Reichstag convened on March 23, its first order of business was to pass the Ermachtigungsgesetz ("Enabling Act"), which gave the government the right to make laws without the involvement of the Reichstag. In effect, the entire Weimar constitution was voided — and it was not long before several other parties followed in the footsteps of the Communists, and were banned. Many opposition politicians were arrested and shipped of to concentration camps, and all non-Nazi ministers of the coalition government resigned through fear.

© AP Photo /
German Chancellor Adolf Hitler during a conference in front of his headquarters on the morning of his birthday on April 20, 1941

Later that month, the "First Gleichschaltung Law" — the first act passed under Ermachtigungsgesetz — dissolved every state parliament in Germany, and ordered their seats reallocated in line with the votes in the last Reichstag election, cementing Nazi control over every part of the country.

In May, trade union association Allgemeiner Deutscher Gewerkschaftsbund was effectively destroyed when leaders were imprisoned and their facilities occupied by the Sturmabteilung. All trade unions were also dissolved and replaced by the German Labor Front, which all workers were compelled to join.

In July, the Gesetz gegen die Neubildung von Parteien act declared the Nazi Party to be the country's only legal political entity — and that November, elections were held (although somehow the National Socialists — by definition the only party running, still only managed to secure 92.1 percent of the vote).

A referendum on German withdrawal from the League of Nations was held the same day, and secured even greater public backing (95.1 percent).

By summer 1934, Nazi Germany had become even more centralized, with constituent states reduced to mere provinces and their institutions essentially abolished. Yet, there was still scope for the Fuhrer to further consolidate his stranglehold — Hitler instructed the SS to kill Ernst Rohm and other Sturmabteilung leaders, former Chancellor Kurt von Schleicher and several aides to former Chancellor Franz von Papen in the infamous Night of the Long Knives (which lasted June 30 — July 2 1934).

On August 1, Hitler received word that President Hindenburg was on his death bed. The Nazis scurried to pass "The Law Concerning the Highest State Office of the Reich" before the end of the day, an act that stated upon the death of the incumbent president, the office would be merged with that of the chancellor, and all competencies of the former would be transferred to the "Fuhrer und Reichskanzler Adolf Hitler."

The law abolished the last means by which Hitler could be legally dismissed, and with it the last check on Nazi power in Germany.

Hindenburg died at nine am the next day — and in a stroke, Hitler became head of the German state, and head of government. No objections were raised — after all, there was no one left to object.

Hitler would remain the absolute dictator of Germany until his suicide in 1945.

Almost poetically, the Potsdam Conference, at which the leaders of the US, UK and Soviet Union met to cement the shape of defeated post-war Germany, also ended August 2, 1945.

At the conference, it was agreed Germany would be divided into four occupation zones (as was capital Berlin), every captured Nazi would be put on trial, all German annexations in Europe would be reversed and the country reduced in size (contracting the country's borders by 25 percent, compared to 1937), and any German citizens remaining beyond the new borders of the country would be expelled "orderly and humanely" and sent back to their homeland.

Moreover, sizable reparations to the Allies were imposed, measures agreed to ensure German standards of living did not exceed the European average (necessitating the dismantling of great swaths of the German economy), and all German industry with war-potential was earmarked for destruction, with sectors such as metals, chemicals and machinery scheduled to be reduced to an absolute minimum. The country was to be converted to an agricultural and light industry economy, permitted to export only coal, beer, toys, textiles and similarly benign goods.

Long-dead by the time the Potsdam Conference was held, even Hitler — a man obsessed with historical cycles and parallels — would likely find some irony in the very date upon which he ascended to absolute power in Germany also marking the ultimate destruction of Nazism, and his every ambition.