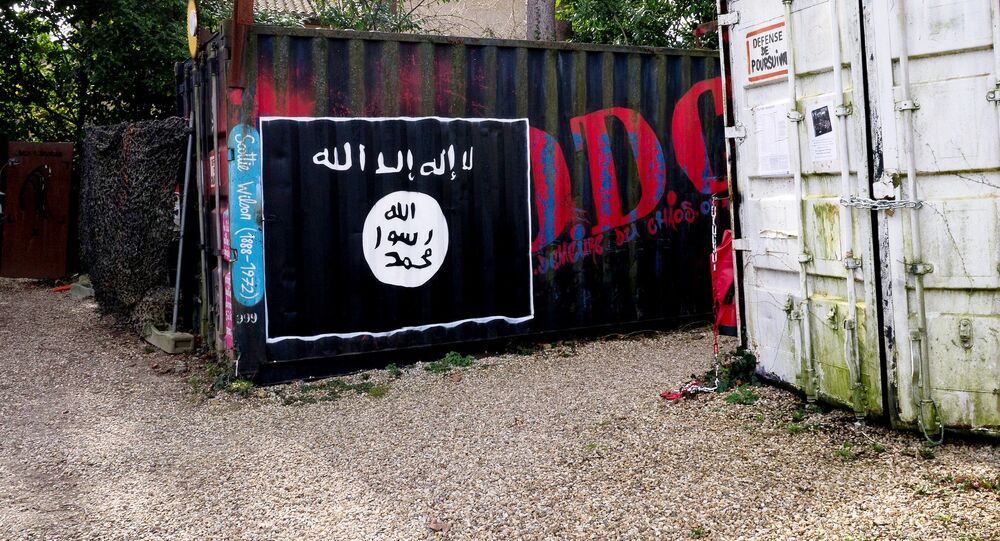 Younger refugees in Sweden seem to be ideal prey for Islamists. There, Daesh flags have been spotted in refugee accommodations around the country, amid the Nordic nation's efforts to combat extremism.

© Photo : Youtube/Channel 4 News
Women and Children: A Closer Look at Sweden's Jihadists
Hörby Municipality in Sweden has recently renounced an agreement with an asylum home for unaccompanied young people after there were reports that the staff were radicalizing young men. According to Merzek Botros, an Arab pastor from Stockholm, the incident in Hörby is far from the only one of its kind.

In his capacity as a priest and spiritual adviser, Botros has been visiting asylum homes across Sweden, where he has seen such blatant tokens of Islamism as Daesh flags hanging and Daesh music being played. By his own admission, he tried to warn the authorities about creeping Islamism, yet never heard back from them.

Another perennial problem is the harassment and the persecution of Christian asylum seekers and those who want to convert.

"I have personally helped many Christians to report threats and harassment from Islamists to the police," Merzek Botros told the Christian newspaper Världen Idag.

© AFP 2021 / Stig-Ake Jonsson
'Send Me Instead!' Swedes Volunteer to Replace Rejected Refugees
According to him, it is not difficult to prove both threats and harassment, yet the victims nevertheless receive little to no help at all from the Swedish police.

"After police reports, they will return to the same accommodation, and then there'll be war," Botros said, venturing that this forces many people to leave their accommodations.

Botros related a story of a Muslim couple who converted to Christianity.

"When they became Christians, the wife took off the veil. Then she was told she was about to get slaughtered," Botros told, concluding that the couple finally had to leave Sweden for Germany.

© REUTERS / Anders Wiklund/TT News Agency
Jihadi 'Veterans' Return to Sweden, Establish Islamist Extremist Networks
Meanwhile, Sweden's National Defense Institute was earlier this year commissioned to investigate the spread of jihadism and militant Islamism in the Nordic country, on behalf of the Swedish Civil Protection and Emergency Agency (MSB). Senior terrorist researcher Magnus Ranstorp, who leads the project, ventured that it was remarkable it had not been done earlier. By Ranstorp's own admission, the research group focus on socially vulnerable environments where children and young people grow up, the Swedish daily Svenska Dagbladet reported.

Earlier this year, Sweden's Security Police SÄPO estimated that there were around 3,000 extremists in Sweden, which is a steep rise from the previous years' estimate of several hundred. Of them, about 2,000 were Islamist radicals and 1,000 right-wing extremists and militant leftists, the Swedish daily Dagens Nyheter reported. According to Wilhelm Agrell, a professor of intelligence analysis at Lund University, only a dozen of them can be under persistent surveillance.

In recent years, Sweden emerged as one of the biggest jihadi exporters per capita, supplying about 300 jihadists to the Middle East. About half of them returned, leaving the Swedish authorities puzzled by the problem of returning Daesh defectors.

© AFP 2021 / JONATHAN NACKSTRAND
From Hundreds to Thousands: Sweden Crawling With Daesh Sympathizers
While the Swedish government has so far been relying on peaceful efforts to somehow "reform" the former terrorists, Erik Nord, the police chief of Greater Gothenburg, argued that Sweden should instead terminate their citizenship, like Great Britain does. Since the bloody terrorist attacks in London and Manchester earlier this year, about 40 suspected terrorists have had their citizenship terminated. Now, calls are being heard in Sweden to follow the same template.

"We cannot have people living here and propagating the overthrow democracy in a society that has been so generous to them," Erik Nord told the local newspaper Göteborgs-Posten, who has suggested that Sweden revoke their residence permits as well.

International law allows citizenship to be withdrawn if the person in question has dual citizenship and thus does not become completely stateless.