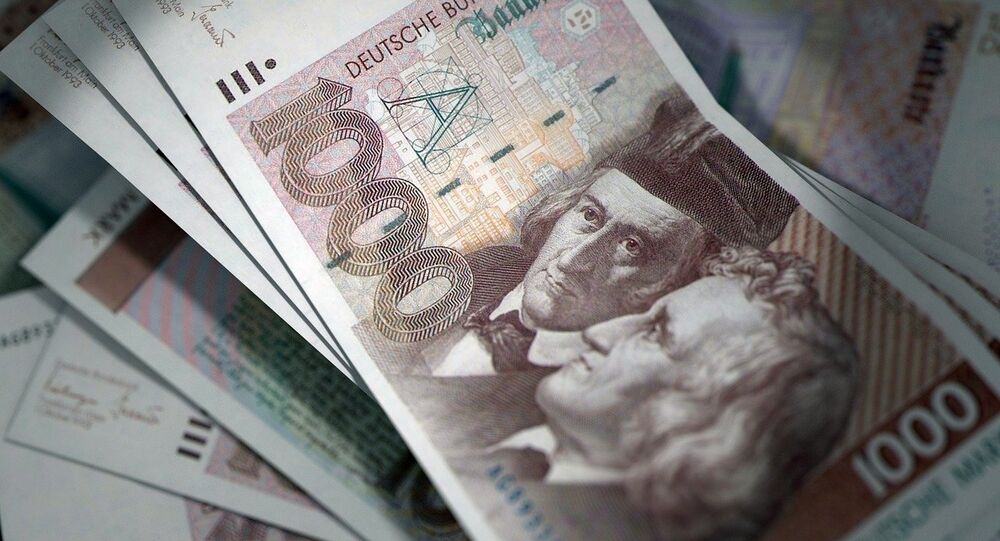 Just In Case: Germans Keep 13 Billion Deutschmarks Stashed Away for a Rainy Day

Germans maintain an affinity for the old Deutschmark and have held on to billions of the currency despite the transfer to the Euro currency in 2002.

© AP Photo / Markus Schreiber
Under the Yoke: Euro Parliament Politician Rues Germany's Status as US 'Vassal'
When Germany's national currency was replaced by the Euro in 2002, many Germans greeted the change with skepticism.

Swapping the reliable Deutschmark, which had been first established as the currency of West Germany in 1948, in order to share a currency with 320 million other Europeans seemed like a big risk.

Fifteen years later, it appears that many Germans are still nostalgic for the old Deutschmark, and are keeping their old banknotes and coins in a safe place.

According to the German Bundesbank, 12.67 billion Deutschmarks (€6.5 billion; $7.4 billion) remained in circulation at the end of June. This number is comprised of an estimated 166.6 million banknotes and 23.4 billion coins, the German newspaper Tagesspiegel reports.

While it can still be exchanged with the central bank, the money is no longer legal tender. The Bundesbank says that many are hanging onto it for sentimental reasons.

"Quite often, these banknotes and coins are stored simply for nostalgic reasons, or they are owned by collectors," the central bank said.

Every year, the Bundesbank exchanges 100 million Deutschmarks for Germans who have decided to finally cash in the currency for euros. It exchanges the old currency at the same rate it did when the Euro was introduced in 2002: one Euro for 1.95583 DM. The central bank believes that more than 95 percent of the currency has already been exchanged.

Although their wallets haven't contained Deutschmarks for a long time, old habits are hard to break and many Germans still convert their financial calculations into Deutschmarks. According to a 2015 survey for Bank of Scotland, 47 percent of Germans still think about their purchases in Deutschmarks.

MEPs Slam EU Commission for 'Capitulation Over Deficiencies' in the Euro