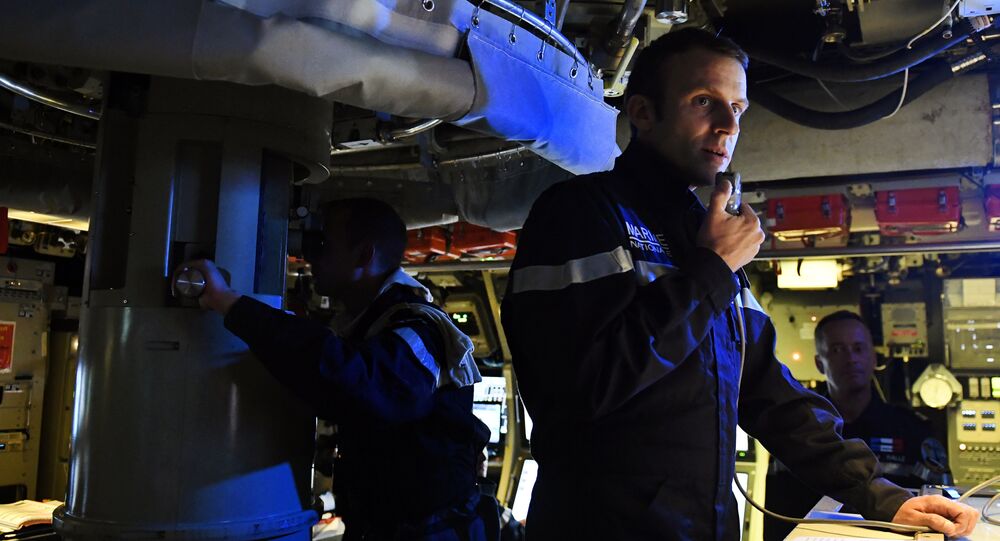 Strike a Pose: Why is Macron Flexing His Military Muscles?

French President Emmanuel Macron is trying his best to create an image that he is a strongman who upholds the interests of the state, political commentator Florian Silnicki told Sputnik France.

In May, the President drove along the Champs-Elysees in an army vehicle, and later attended a ceremony dedicated to regional forces fighting terrorists in Mali.

In this regard, the question arises whether Macron, who is incidentally the only French President who did who didn't serve in the army, is trying too hard to create a brutal and bellicose image as a political strongman.

In an interview with Sputnik France, Florian Silnicki, an expert on political PR and founder of the agency LaFrenchCom, said that Macron decided to "use the strategy of de-sacralization and the presidentialisation" related to the post of president.

"He is trying to create in the media an image of a strongman who will be 'above the fight' and defend the interests of the state. We saw this on the very first day of his presidency, when he drove along the Champs-Elysees in an army car, in what was a reference to the historical past and his predecessors," Silnicki said.

He added that Macron is also trying "to leave a mark in history and create an image as a powerful president in order to actually preserve himself, because he learned from the lessons of unsuccessful  communication built by his predecessors Nicolas Sarkozy and Francois Hollande," which rode roughshod over their approval ratings.

"Emmanuel Macron wants to avoid such a scenario by trying to establish the closest contacts with the French public opinion, which still nourishes tender feelings towards the idea of a republican monarch," according to Silnicki.

"Macron is trying to use all the levers he has to create an image of a modern but powerful president. In this regard, military leverages are a big trump card for creating a relevant image in the eyes of public opinion. All the levers are useful," he said.

When asked whether Vladimir Putin, Justin Trudeau and Barack Obama can be seen by Macron as models to emulate, Silnicki said that as such, the role model is "all the best that these politicians used in their communication."

"Right now, Macron's advantage is the ability to learn some lessons from the experiences of these politicians and avoid the mistakes of his predecessors," Silnicki said.

© REUTERS / Etienne Laurent/Pool
Macron Wants France to Play Bigger Role in Mediating Conflicts 'From Mali to Ukraine and Syria'
Asked about whether there is a risk that the French will get tired of the policy pertaining to communication, he said that "they are not tired yet."

Silnicki recalled that at least 64 percent that the French are positive about the French President, and approve of his communication strategy.

But Macron is only at the beginning of his term, given that the presidential elections were held quite recently. Macron is now going through a kind of grace period, so one needs to wait and see in order to draw conclusions," according to Silnicki.

"What we know today is that the communication he builds is being directed and controlled to minimize risks. It works because there are no serious shocks. Such controlled communication will be tested for strength as soon as the first social clashes occur. When the storm breaks out, we will see how well the captain is coping with his work," he concluded.