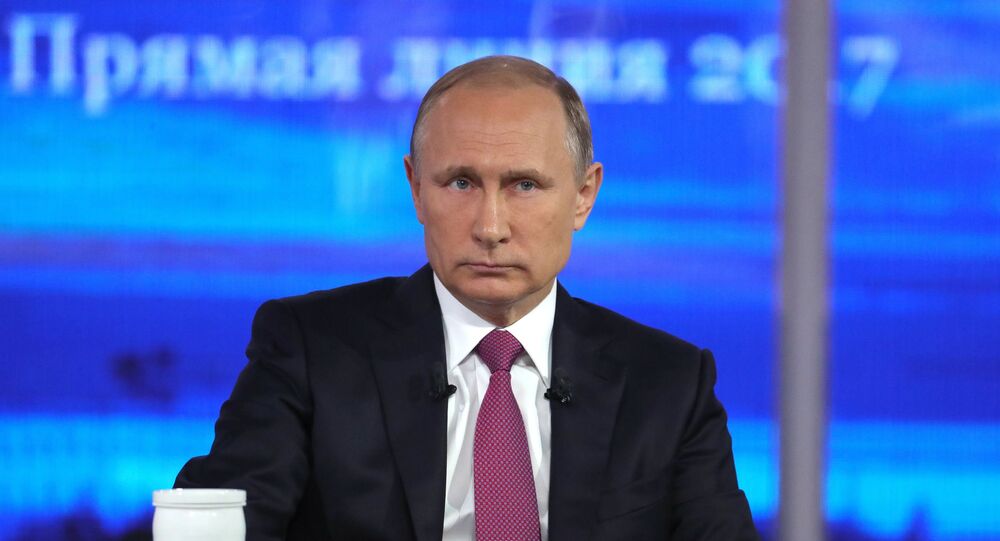 Ahead of US President Donald Trump's visit to Warsaw, Polish philosopher and journalist Jan Hartman told Sputnik that Poland would be better off hosting Russia’s President Vladimir Putin instead.

© REUTERS / Jerzy Dudek
Polish President Says Trump May Come for State Visit in July
Jan Hartman said that even though every visit by a US president, no matter how short, is seen by the Polish government as another chance to underscore the country’s image as an important ally for the United States, Poland would benefit more by inviting Putin to come over.

“The Polish government is at loggerheads with the EU, that’s why it is looking at America and trying to convince itself and everyone else that with Trump at the helm, the US is trusted friend and guarantor of the country’s security. However we all know well that Trump takes little interest in Eastern Europe,” Jan Hartman said in an interview with Sputnik Poland.

He added that he did not expect any tangible results from President Trump’s visit.

“Trump is not the man whose words really mean something. Even if he says something good about Poland and even pats us on the back, it won’t mean anything. Poland believes that by joining NATO it will feel safe protected by the US missile shield, but we also know that Trump is not a big fan of NATO and that the security of our country and that of the other Eastern European countries depends more on European integration and the buildup of  European defense,” Hartman noted.

When asked why all this official fuss about President Trump’s visit, Jan Hartman said that he did not expect much from this visit, that there would be traditional assurances that the Poles will be granted visa-free travel to the US, but everything will remain as it is.

“Poland is not a big priority for the US and there is little we can do about it. Donald Trump is not an expert on Eastern Europe and he will certainly not be our friend. Meeting with Russians would be way more important now that our relations are at low ebb and top-level contacts are in a deep freeze. It would also be beneficial from the standpoint of security, economic cooperation and mending fences with Russia, which is our neighbor,” he emphasized.

“A meeting with Putin would be more important that meeting Trump who, among other things, won’t be able to meet Jaroslav Kaczynski who has neither an official nor diplomatic status to meet with foreign leaders,” he added.

Speaking about the impact Donald Trump’s meeting with Vladimir Putin at the upcoming G20 summit in Hamburg could have on the political climate in both the US and Russia, and also on the situation in the world in general, Jan Hartman said that he was looking forward to constructive security cooperation between  Moscow and Washington.

© REUTERS / Kacper Pempel
Better Off Without You: Is Trump Giving Up on Poland by Slashing Aid by 100%?
“The situation is Syria is getting better and I hope that the main players will somehow agree to work together or at least avoid a conflict,” Hartman noted.

He described Trump’s vision of the world as a place the great powers divide into their respective spheres of interest as “anachronistic.”

“What really matters is for [the US and Russia] to keep talking to each other and coordinate their military actions. And again, there global economic problems we need to deal with and I think that here Russia and America are fairly pragmatic about this,” Jan Hartman concluded.

President Donald Trump’s brief visit to Poland on Thursday will be followed by a stop in Hamburg, Germany, for the Group of 20 summit.