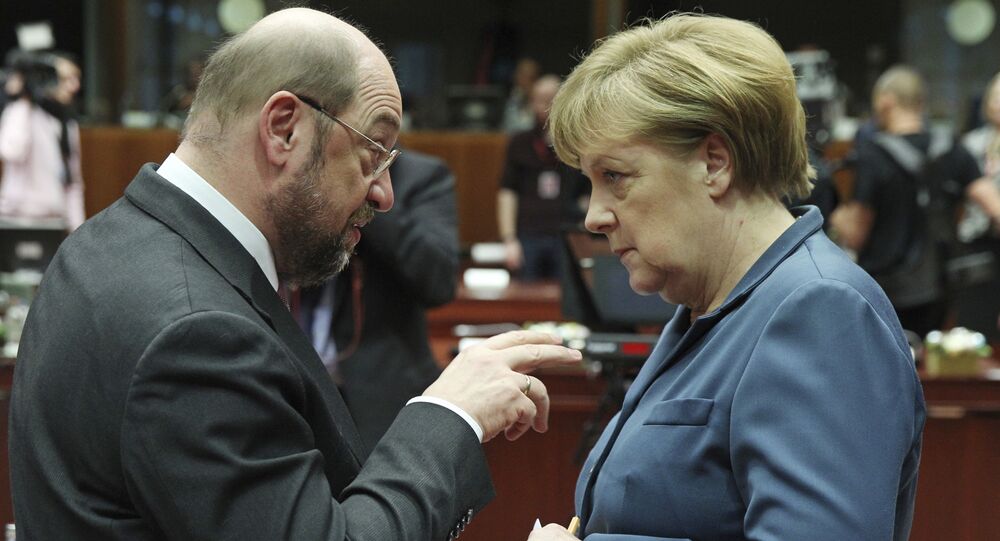 "Position of disconnect, taken by the [CDU/CSU] alliance… has been seriously complicating the work of the coalition and hindered the progress in Germany," Schulz said at a press conference on results of the work of the SPD ministers within Merkel's federal government.

Schulz stressed that the government would have been more successful if the SDU/CSU alliance had not blocked a number of bills which were proposed according to the coalition agreement. In particular, he noted that the alliance blocked the legislation initiatives regarding same-sex marriage and granting Lesbian Gay Bisexual and Transgender (LGBT) couples the right to adopt children. Schultz added that he would seek a parliamentary vote on the issue this week.

"We are the driving force of this government. We have had to work against enormous resistance. We want achieve much more and we want to lead the next Federal government," Schultz said.

© REUTERS / Hannibal Hanschke
Merkel’s CDU 7% Ahead of Social Democrats Four Months Before Elections
Speaking of the successes of the SPD members of the government, Schultz mentioned the introduction of minimum wage standards, improvements in financial situation of families with children, social housing, ensuring women employment and increase of places in kindergartens and schools.

Same-sex marriage is the subject of controversy between the SPD and the CDU/CSU alliance. On Monday, Schulz accused Merkel for her "attack on democracy," noting that the chancellor was allegedly blocking the initiatives of his party, including the bill on same-sex marriage. On the same day, Merkel responded to the accusations, saying that the lawmakers should discuss the issue in the future and make a "decision of conscience," rather than vote in the line with the parties' position.

The elections to Germany's Bundestag are set for September 24. According to the Sunday Emnid survey conducted for the Bild newspaper, only 24 percent of the respondents support SPD, which is a decrease in comparison to the figures published by the same poll a week earlier.