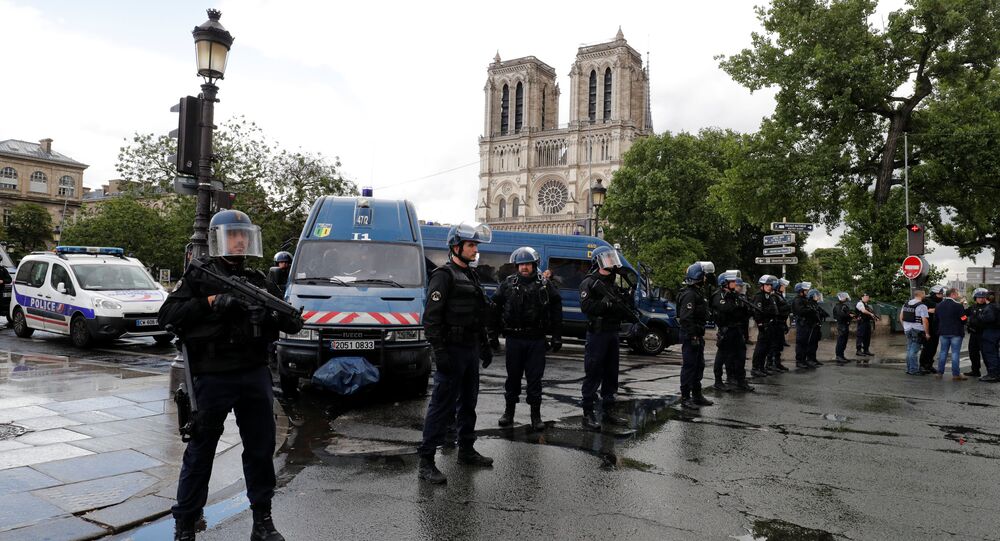 A 40-year-old assailant of Algerian descent attacked on Tuesday police officers with a hammer near the Notre Dame cathedral in Paris, slightly injuring one of the officers.

MOSCOW (Sputnik) — The first reports about the attack emerged at about 14:30 GMT. According to police, the individual shouted that the attack was committed in retaliation for French policy in Syria and called himself a "caliphate warrior" of Daesh terror group, outlawed in Russia.

Police opened fire and the attacker was critically injured. About 900 tourists were remained blocked in the iconic 12th century cathedral for more than two hours over security concerns. None of them was injured.

© REUTERS / Philippe Wojazer
Police Neutralize Terrorist Trying to Attack Them With Hammer at Notre Dame in Paris
According to French Interior Minister Gerard Collomb, the man had along with the hammer two knives and an identification document saying the he was a student of Algerian descent that is being checked now. The minister added that the assailant was a lone-wolf attacker.

The attacker reportedly lived in the department of Val-d'Oise and was not known to the French intelligence services. The anti-terror department of the French prosecutor's office has already launched an investigation into the incident.

The incident occurred three days after an attack in London where a car drove into pedestrians on London Bridge before continuing in the direction of the Borough Market. Three people then climbed out of the car and attacked people with knives. The attackers were shot by the police on the scene. Seven people were killed and 48 injured.