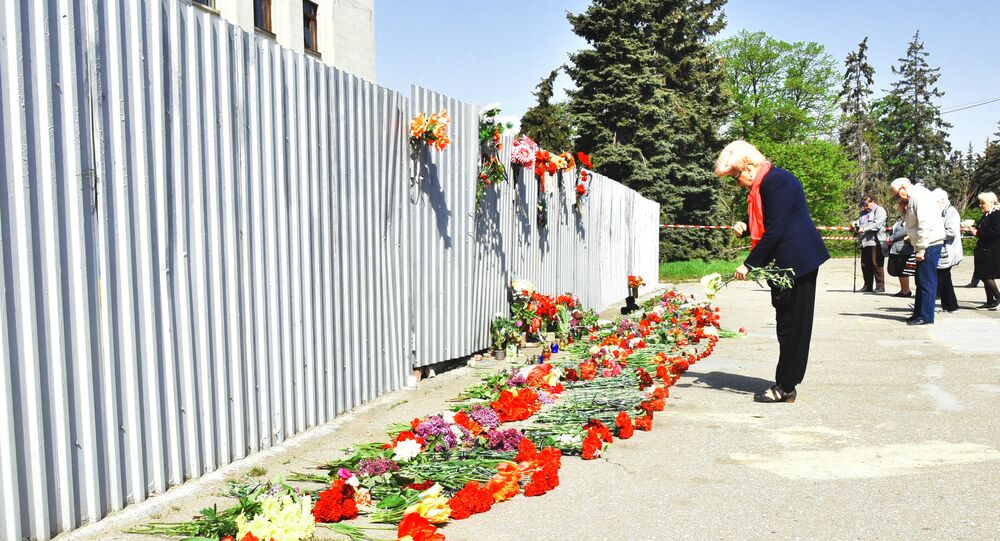 Russian President Vladimir Putin on Tuesday called on the international community to avoid the recurrence of crimes like the attack of pro-Kiev nationalists on protesters in Ukraine's city of Odessa on May 2, 2014, which claimed lives of dozens of people.

© Sputnik / Stringer
Hundreds of People Gather in Ukraine's Odessa to Commemorate Anniversary of 2014 Massacre
BOCHAROV RUCHEI (Russia) (Sputnik) — After his meeting with German Chancellor Angela Merkel, Putin drew attention to the fact that those responsible for the tragedy had not yet been held accountable.

"The international community has not a right neither to forget about [Odessa tragedy] nor to allow for such barbaric crimes in the future," Putin said.

On May 2, 2014, the confrontation between the radical supporters of the new government in Kiev, which came to power after what a coup, and anti-government protesters started on Odessa's Hrets'ka Square and resulted in the demolition of an anti-government groups' camp on Kulykove Pole square and retirement of a group of protesters to the city's House of Trade Unions where they were blocked by the radicals. The building was subsequently set on fire by Molotov cocktails thrown by the radicals.

© Sputnik / STR
Odessa Residents Detained in Suspicion of 'Preparing Terrorist Attacks' - SBU
The clashes and fire left 48 people, including seven women and one minor, dead while the overall number of casualties exceeded 250, according to the Office of the United Nations High Commissioner for Human Rights (OHCHR). According to media reports, 26 people from both sides currently stand accused in the case which is now being considered by the court, and six individuals have identified as suspects. Despite this, the court has failed to convict or punish anyone for the events.

In February, the head of the OSCE Special Monitoring Mission to Ukraine, Alexander Hug, said that the probe into the incident in Odessa was not carried out efficiently and criticized the lack of results.

Media reported in December 2016, that Odessa court decided to relaunch the investigation into the incident due to the changes in the panel of judges.