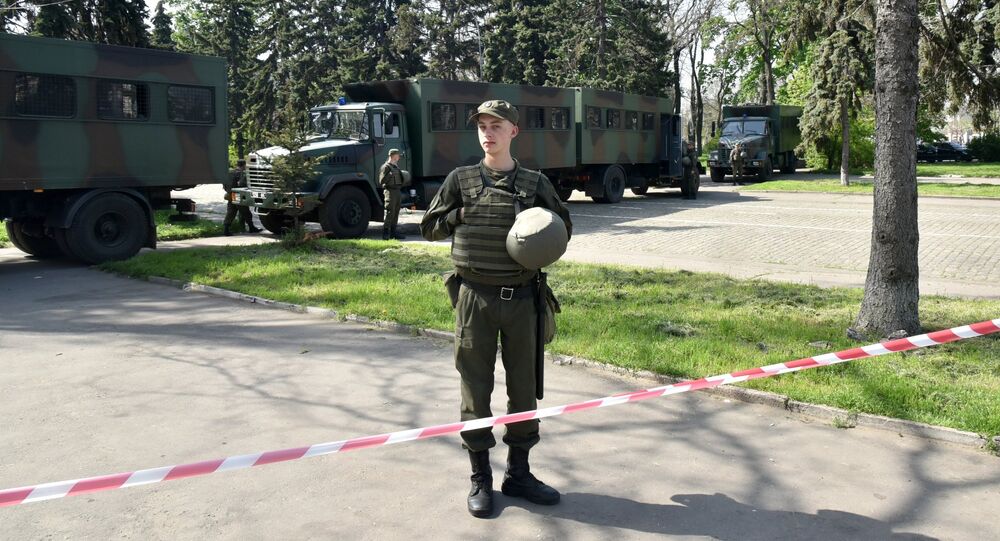 The Security Service of Ukraine (SBU) has detained a group of local residents in the southern Ukrainian city of Odesa on suspicion of "preparing terrorist acts, sabotage and provocations," the SBU said in a statement Tuesday.

© Sputnik / Anton Kruglov
US Media, Ukraine Still Keep Silent on Massacre in Odessa - Activist
KIEV/ODESSA (Sputnik) — On Tuesday, an event is underway in memory of the victims of the tragedy that occurred in Odessa on May 2, 2014, when Ukrainian radicals killed 48 people and over 200 were injured during clashes in the city.

"SBU officers are holding activities in Odessa to prevent terrorist manifestations during the May holidays, as well as the anniversary of the tragic events on May 2, 2014 in the city. Operatives of the special service and the Alpha special unit detained in Odessa a group of local residents who are reasonably suspected of preparing terrorist acts, acts of sabotage and provocations," the SBU statement said.

According to the statement, the exact number of those detained has not been clarified and the operational and investigative activities are ongoing in the city.

A Sputnik correspondent reported from the city that Odesa police evacuated people from Kulykove Pole, where the ceremony to commemorate victims of the 2014 tragedy was underway, after police received a report of a bomb threat in the Trade Unions House, which later turned out to be false.

© AP Photo / Sergei Poliakov
Odessa Remembers: Residents Mourn the Victims of 2014 Massacre
Ukraine's police reported that one person was detained on the ground of disobedience to law enforcers during the evacuation.

In 2014, a group of pro-Kiev radicals blocked anti-government protesters in Odesa's House of Trade Unions and set the building on fire by hurling Molotov cocktails inside. An investigation was opened into the incident but no convictions followed.

In May 2016, Ukraine's law enforcement officials were also on high alert in Odesa in the context of the second anniversary of the 2014 massacre. The country's security services detained a person on suspicion of planting an explosive device in the central part of the city, as well as a group of perpetrators of the shooting attack on journalists. Police had also received a report about an explosive device at Kulykove Pole.