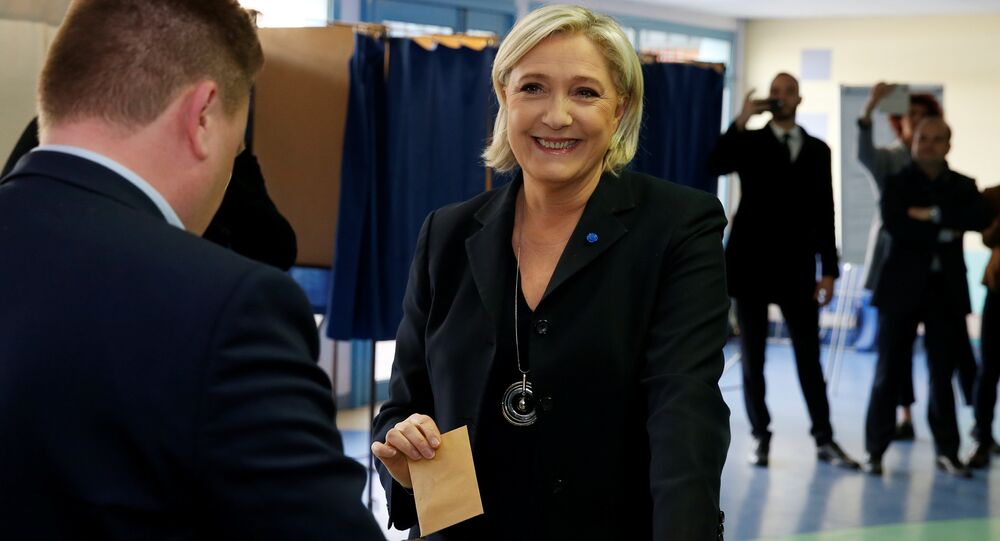 The far-left French presidential candidate Jean-Luc Melenchon has for the first time refused to urge people to vote against the far-right leader Marine Le Pen during the upcoming presidential runoff in France.

© REUTERS / Gonzalo Fuentes
Triumph of Le Pen, Macron Signals 'Big Change for French Political Regime'
The leader of the La France Insoumise (Unsubmissive France) movement, Jean-Luc Melenchon, who was endorsed by the French Communist Party, has for the first time refused to call on his supporters to vote against the far-right leader Marine Le Pen in the French presidential runoff next week.

On Sunday, the first round of the presidential election took place in France, with independent candidate Emmanuel Macron receiving most of the votes, 24.01 percent, and far-right National Front leader Le Pen coming in second with 21.53 percent.

At the same time center-right candidate Francois Fillon obtained 19.91 percent of the vote, while the radical leftist Melenchon gained 19.64 percent.
Macron and Le Pen are now preparing for the second round of elections, which is to be held on May 7.

As for Melenchon, he seems to have decided to break with his practice of calling on his comrades to vote against the right and the far-right leaders, as he did in in the 2012 and the 2002 elections, respectively.

"I did not receive any mandate from the 450,000 people who decided to nominate my candidacy for telling them what to do next. These people will be asked to make a choice on the website, and the result of the vote will be published," he said.

"Personally, I'm not going to cast a ballot on May 7. My voting for Macron is out of the question and I sincerely hope that people will not do so either. We made a mistake by voting for Chirac in the 2002 elections and we should not repeat it," she said.

Karine Monsegu, a La France Insoumise candidate in the upcoming parliamentary elections, said jokingly in an interview with Sputnik France that on May 7, she will "vote for Melenchon," a clear nod to her desire to drop a blank ballot into the box.

Cillaire, for her part, said that she "would almost prefer to see Fillon and Le Pen in the second round," and that "if Macron comes to power, Le Pen will manage to win in five years."

Some supporters of Melenchon even launched a hashtag # SansMoiLe7Mai ("May 7 without me") on Twitter, warning against going to the polling stations or calling for casting a blank ballot during the runoff vote.

French singer Soan, who also supported Melenchon, told Sputnik France that he was disappointed with the election results.

"A part of me, kind of a little imp, pushes me to go to vote for Marin Le Pen in a show of challenge, while the other part wants me to stay at home during the presidential runoff," he said.

© REUTERS / Pascal Rossignol
Presidential Election in France: 'Despair Over the Existing Policy and Hope for Changes'
When the microphone was turned off, Soan said that "it's better to vote for Le Pen than for Macron, because she at least calls for establishing the retirement age of 60 years [in France]."

According to a poll conducted by Harris Interactive, 12 percent of those who voted for Melenchon intend to cast their ballots for Marine Le Pen in the second round.

However, 36 percent of the respondents who supported Melenchon said that they will refrain from going to the polling stations or will drop a blank ballot in the ballot box.

Russia Respects France's Choice in First Round of Election - Kremlin