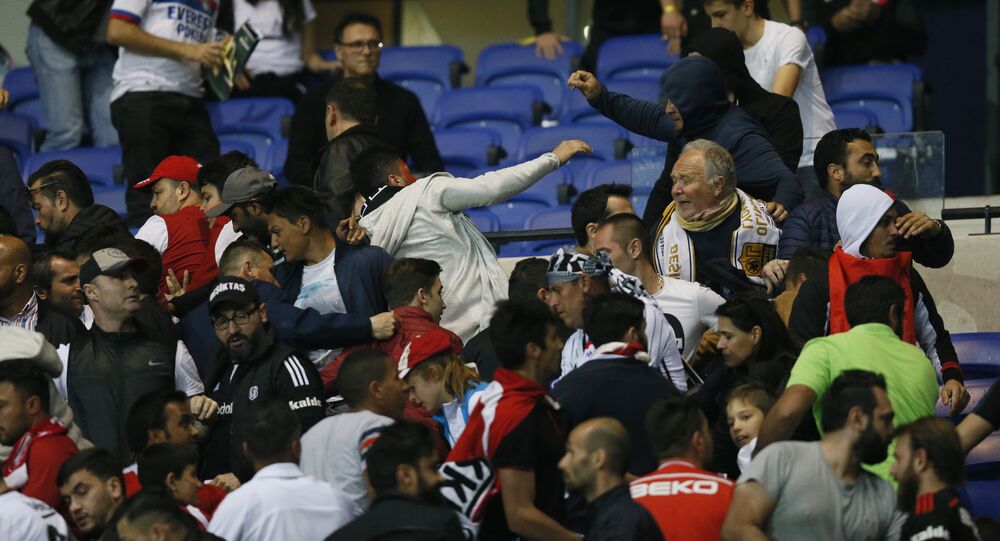 Chaos ensued ahead of Europa League football match between the Besiktas football club from Turkey and the Lyon football club from France, as a fight that began in the stands spilled out onto the field. The melee reportedly grew to involve thousands of people.

The Lyon club wrote on Twitter, "Projectiles and Fireworks launched from the top of the stands require supporters to seek refuge on the lawn." The game was set to take place Thursday night but now has to be rescheduled.

Fights reportedly began when Besiktas fans threw fireworks and other objects onto home team supporters seated below them. Besiktas fans apparently fought with police before entering the stadium as well.

Jean-Michel Aulas, president of the Lyon club, walked onto the pitch with other officials in an attempt to calm people down so the game could proceed, but their efforts were to no avail.

The blow-up comes a day after fans of the UK’s Leicester football club clashed with police in Spain, throwing flares and bottles before a scheduled game against Atletico Madrid.

​​Wednesday also saw the German Borussia Dortmund team bus get attacked by fans while en route to their Champions League game in Monaco, resulting in the hospitalization of defender Marc Bartra, who sustained arm injuries.

Soccer: Benitez 'Will Leave' Chelsea in May

Rubin Soccer Pitch to be Fit for Chelsea - Club