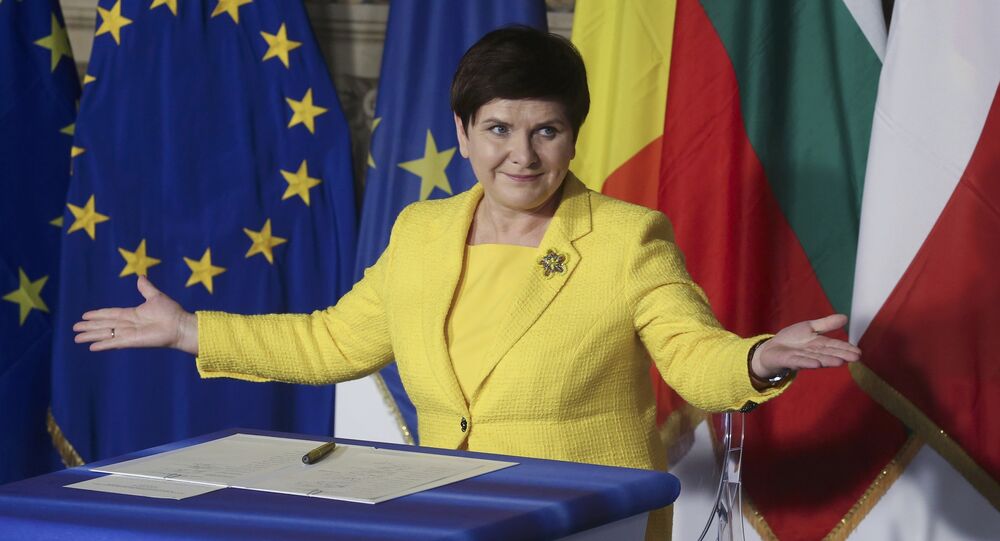 The EU is struggling to come up with answers to Poland and Hungary - both of which have introduced laws which the EU believe are in breach of the EU's principle of the 'rule of law', which - technically - means both are liable to sanctions, under Article 7 of the EU treaties, but which are unlikely to be imposed.

In December, 2016, the commission warned Warsaw that it would remove its voting rights in the EU, if the Polish government did not roll back controversial changes to its Constitutional Court. With Poland defiant in the face of the criticism — denying any "systemic threat to the rule of law," the credibility of the commission is now at stake.

The EU's threat involves invoking Article 7 of the Treaties of the European Union, which allows for it to: "suspend certain of the rights deriving from the application of the Treaties to the member state in question, including the voting rights of the representative of the government of that member state in the Council." Article 7 has never — so far — been invoked against an EU state.

Meanwhile in Hungary, the government has passed a series of laws that could force the internationally recognized Central European University (CEU) — backed by billionaire George Soros, who has been a critic of Hungarian Prime Minister Viktor Orban.

​There was also an outcry after the Budapest government decreed that Hungarian NGOs that receive more than US$25,000 from foreign sources should have to register with the authorities and represent themselves to the public as foreign-funded organizations.

Now MEPs are calling on the Commission to investigate the affair and possible launch action under Article 7 of the Treaties of Europe as they believe Hungary too is in breach of the Rule of Law principle on which the EU is founded.

"Month after month, we are seeing the situation of fundamental rights in Hungary continuously deteriorate under Viktor Orban's regime. The latest attack is on academic freedom through the law designed to shut down independent universities — in particular the Central European University — in order to silence critical thinking against Orban, said European United Left /Nordic Green Left (GUE/NGL) President Gabi Zimmer.

'Take in #migrants or #leave', #EU tells #Hungary & #Poland. Fed up of being dictated to? Join us on the outside! 🇬🇧🇵🇱🇭🇺#BBC #SKY #ITV #UK pic.twitter.com/gDHFIsySRg

​Both Hungary and Poland are also at odds with Brussels over the migrant crisis, with neither country willing to take part in the mandatory relocation plan for refugees — an issue in which they are supported by several other EU member states, meaning that any action to impose sanctions on either country is likely to be met with opposition.