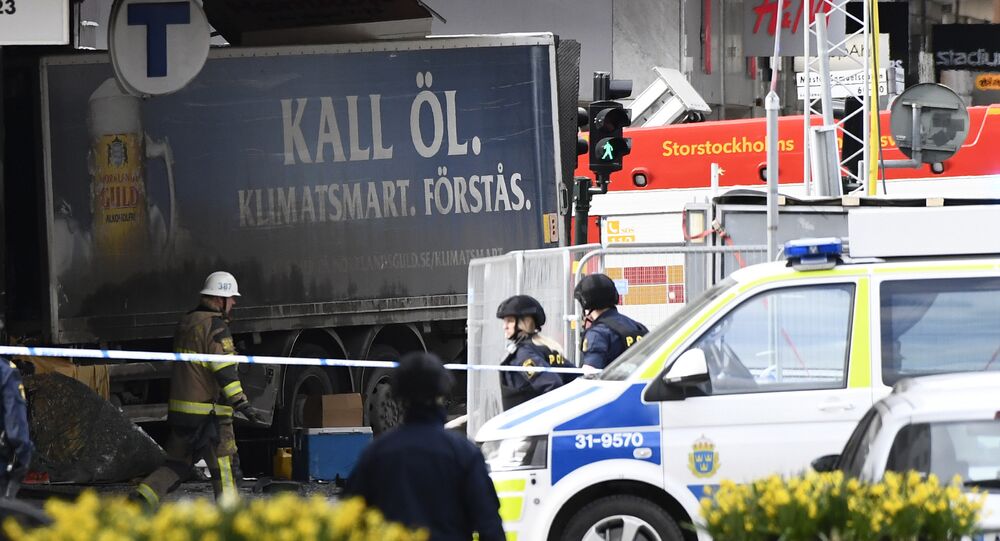 The use of heavy vehicles to commit acts of terror such as those seen in Nice, Berlin, London and most recently in the Swedish capital Stockholm, may serve as an inspiration for like-minded people who already have the will to take innocent lives. The threat posed by such vehicles has sent Scandinavia looking for answers.

© AFP 2021 / Noella JOHANSSON / TT News Agency
Stockholm Truck Attack Sheds Light Upon Threat Posed by Rejected Asylum Seekers
Large trucks are a familiar sight on the roads of Europe, where they tower over the compact passenger cars the EU is known for. More recently, however, they have been used by relative amateurs acting alone to murder pedestrians in the name of Islamist jihad. "This simple methods of vehicular attack may inspire others who already are determined to commit acts of terror," Carsten Bagge Laustsen, an associate professor and terrorism expert at the University of Aarhus, told Danish newspaper Fyens Stiftstidende.

According to Bagge Laustsen, it is clear that the Stockholm attack was inspired by similar deeds carried out in Nice, Berlin and London. Bagge Laustsen argued that this was the simplest way of performing terrorist attacks that require neither preparation nor technical know-how. Accordingly, these factors have made big trucks a weapon of choice among individuals determined to dedicate themselves to holy war in secular Europe. Frank Jensen, formerly head of operations with the Danish intelligence service PET, concurred with this analysis.

"Imagine you are radicalized and suddenly an opportunity to act without actually being trained pops up. This is why such simple methods are being resorted to," Jensen said.

© AP Photo / Fabian Bimmer
Sweden Blows Tax Millions on 'Feminist' Trucks and 'Equal' Firefighting
Finnish Transport and Logistics Association Chairman Teppo Mikkola argued that transport companies currently have no common safety guidelines on how to prevent hijacking. At the same time, he admitted that it was not particularly difficult to steal a truck with its motor running, as vehicles are often left unattended during loading or offloading. As a theft prevention measure, Teppo Mikkola proposed compelling truck drivers to always lock the cabin of the vehicle during loading, Finnish national broadcaster Yle reported.

According to Swedish haulage expert Thomas Morell, technically innovative devices could be used to prevent hijackings. Modern trucks are highly computerized and could potentially be stopped remotely. Removing the key from the ignition and locking the doors when leaving, unfortunately, does not help eliminate the risk of hijacking completely, he argued.

"Anyone with a malicious intent can rob the drivers of the keys at gunpoint or by simply neutralizing him," Thomas Morell told the Swedish newspaper Fallköpings Tidning, calling it deplorable to use a truck to make innocent people suffer for one's ideology.

Franchell is known to have hinted that the propensity among Swedish men to purchase big cars to compensate for having small penises allegedly interfered with feminist Sweden's goal of becoming carbon-neutral. She also lamented the fact that "feminist" snow removal didn't work out as expected, as women slipped and fell "more often" than men.

Last Friday, 39-year-old Uzbek Rakhmat Akilov hijacked a truck owned by the Spendrups brewery, which was making a delivery to a restaurant in Stockholm, and crashed into an Åhlens department store after deliberately mowing down people, killing four and injuring 15.