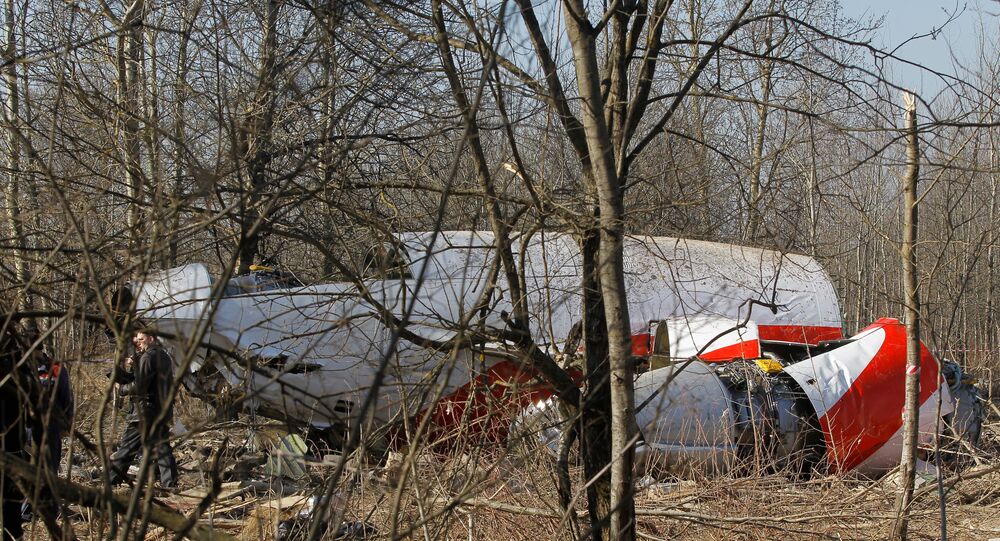 Maciej Lasek, the head of the first commission that investigated the crash of the Tu-154 near Smolensk in 2010, ruled out an explosion aboard the presidential plane.

© AFP 2021 / Wojtek RADWANSKI
Macabre Madness: Warsaw Digs Up Presidential Plane Crash for Political Gain
There was no explosion aboard the plane of former Polish President Lech Kaczyński, which crashed near the Russian city of Smolensk in 2010, taking the lives of all 95 passengers, many of whom were high-ranking government officials, said Maciej Lasek, the Chairman of the Committee for Investigation of National Aviation Accidents of Poland and the head of the first commission that investigated the tragic crash.

"I know the prosecutors' opinion — the opinion of the central criminology laboratory, whose explosives experts conducted research, took samples of soil, of the birch [that the plane crashed into during the runway approach], who had access to samples made during the exhumation of the victims. The samples were studied — there were about 60 or 70 sample," Lasek said.

Specialists have "unambiguously ruled out an explosion," Lasek told Polish television on April 10.

Lasek also added that the plane's cockpit voice recorder contained "no sound of explosion, and the flight data recorder recorded no spike of internal pressure."

The crash happened seven years ago. Both the first commission led by Lasek, and the Interstate Aviation Committee (IAC) determined that the immediate cause of the crash was the crew's decision not to use a backup runway despite poor visibility conditions. The decision was made due to "psychological pressure" put on the crew by the passengers, the investigation report said.

A "systemic cause" of the accident was "significant shortcomings in the organization of flight operations, flight crew preparation and arrangement of the VIP flight in the special air regiment."

The investigation was revived by Polish Defense Minister Antoni Macierewicz, who has long pushed the idea of Russia's guilt in the plane crash. According to RIA Novosti, Macierewicz's claims regarding Russian involvement are dismissed as politically motivated even within Poland.

Russia has repeatedly denied any involvement in the crash.