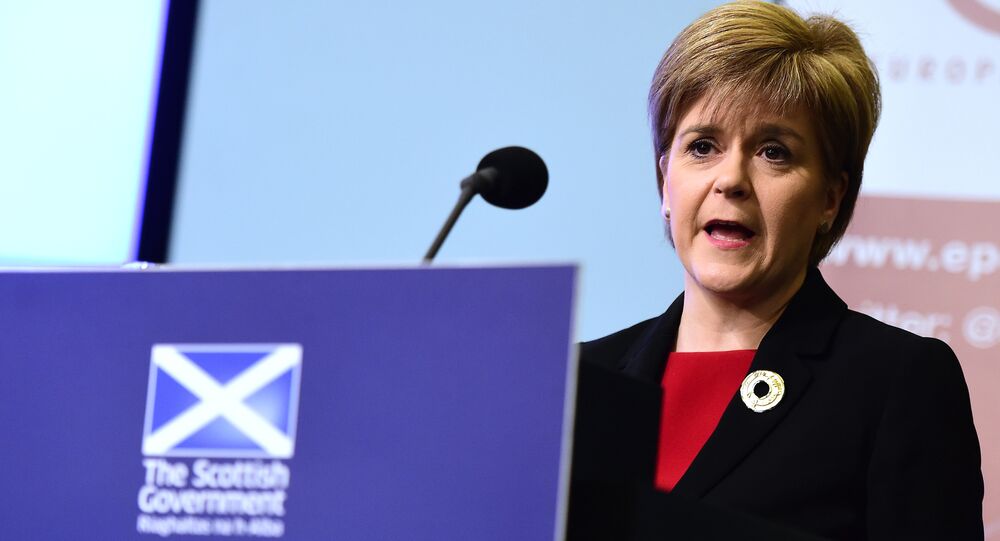 Scotland May Do Better on Its Own as EEA Member, Analyst Says

After calling for a controversial new referendum on Scottish independence, First Minister of Scotland Nicola Sturgeon has embarked on a five-day tour of the United States.

© AP Photo / Jane Barlow
Sturgeon 'Cynically' Exploits Brexit With New Independence Vote Call - UKIP
Sturgeon has been sharply criticized for using her taxpayer-funded tour to promote Scottish independence. She insisted the tour would be focused on boosting trade and investment, but it's demonstrated a sharp political edge as well.

"She's bolstering the case for Scottish independence, because she's acting as a leader of an independent country," he explained.

"California is a leader in climate change, in renewable energy, and so is Scotland, because Scotland geographically is suited to renewable energy and using the natural resources that [it] has…But on the political level, again, it makes the case that Scotland is a nation in its own right that's making these decisions in its own right and is a player on the world stage."

During her speech at Stanford University, Sturgeon claimed voters in Scotland would prefer independence to the idea of staying part of the UK after it has left the EU, despite the "challenges" that leaving the UK would create.

​According to Wight, Scotland may not meet that many obstacles in re-applying to join the EU, should it leave the UK.

"As you know, Spain has been cited as a country that would veto Scotland joining the EU as an independent country, worried about… Catalonia, especially. But the Spanish foreign minister has come out and said that Spain would not veto Scotland's application…so that's massive," he said.

"I think there's a growing feeling across the EU that the UK needs to be taught a lesson, because this is a very dangerous precedent."

Wight believes Scotland could maintain its economic and diplomatic clout as its own country.

"Because of restrictions that are in place under the terms of the EU membership, I don't think Scotland's best path is to become a full member of the EU, I think it would be much better joined to the European Economic Area alongside Norway and Liechtenstein and Iceland," he suggested.

© AFP 2021 / James Glossop
Theresa May in Battle to Keep Scotland in UK, Britain Out of EU
"Because that would mean that it would not have to sign up to the euro, it would have to pay a fee to gain access to the single market… but most importantly, it would not have to keep to the budget deficit gap as by the Lisbon treaty, and that means Scotland could run a deficit for purposes of investment and public services and in jobs and in infrastructure and so forth, and follow a demand-led economic policy."

Sturgeon wrote to British Prime Minister Theresa May last week to formally request a second Scottish independence referendum, after MSPs voted 69 to 59 in favor of seeking permission for a vote to take place between fall 2018 and spring 2019. However, May has said that "now is not the time" for a second plebiscite.